Home / North Carolina / Jr. Livestock Sale of Champions draws $182,500
A new user experience is coming! We'll be asking you to login to your Morning Ag Clips account March 1st to access these new features.
We can't wait to share them with you! Read more here. 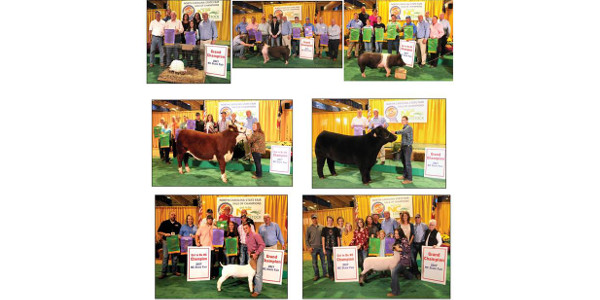 “We are proud that so many businesses and organizations turned out to support the hard work of all these junior exhibitors,” said Agriculture Commissioner Steve Troxler. “The money raised will go a long way towards college educations, scholarships and educational outreach.”

The grand champion Got to Be NC steer was shown by Nora Cave of Elkin. That steer was purchased by N.C. Farm Bureau Insurance, Powers Great American Midways, Harward Brothers Livestock Market, Carolina Stockyards and Thompson Cattle Co. for $18,000.

Farm Credit Association of North Carolina purchased the grand champion junior market lamb, which was also the Got to Be NC lamb, for $16,500. The lamb was shown by Audrey Glass of Belhaven. Tractor Supply Co. purchased the reserve champion lamb, shown by Hunter McMillen of Grandy for $8,000.

Canton, for $17,500. The reserve grand champion meat goat shown by Savannah Weeks of Camden was purchased by N.C. Farm Bureau Insurance for $9,500.

The grand champion Got to Be NC barrow was shown by Conner Kennedy of Pink Hill. It was purchased for $25,500 by the N.C. Pork Council, Smithfield Farmland, Prestage Farms, Hog Slat Inc., Duplin Marketing and Mt. Olive Livestock.

The reserve grand champion barrow was shown by Hunter McMillen of Grandy. Harris Teeter purchased the animal for $12,000.

The youth receive 60 percent of the purchase amount, while the remaining 40 percent goes to support youth scholarships and youth livestock educational programs in North Carolina.

Following the auction of the grand and reserve grand champions, a truckload support auction was held, raising $106,000 to provide additional support to the over 690 youth that participated in the junior market animal shows and sales.