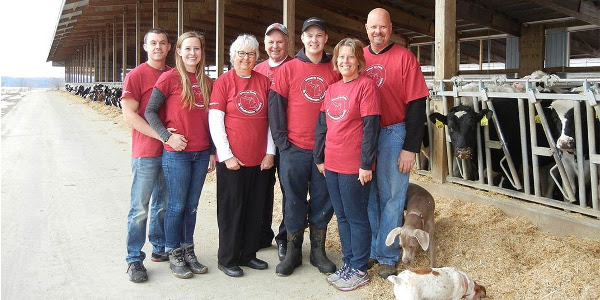 A recently updated analysis of the U.S. dairy industry’s impact on the environment concludes that Greenhouse Gas (GHG) emissions to produce a gallon of milk have actually dropped nearly 20% over a 10-year period from 2007 to 2017. Pictured above, The Horning family, now in its fifth generation as Michigan dairy farmers, care for 400 cows and raise crops on 800 acres. (Photo: United Dairy Industry of Michigan)

LANSING — A new Journal of Animal Science study shows U.S dairy farmers have excelled in production efficiency — so much so that the environmental footprint to produce a gallon of milk has shrunk significantly since 1944 — using 90% less land, 65% less water, 63% smaller carbon footprint per gallon of milk.

More importantly, the trend on production efficiencies and reduced environmental impacts has actually accelerated in the last 10 years, based on a recently updated analysis of the original 2007 study, which concluded that Greenhouse Gas (GHG) emissions to produce a gallon of milk dropped nearly 20% over the 10-year period from 2007 to 2017.

According to Campbell, the Journal of Animal Science published a study in 2009, “The environmental impact of dairy production: 1944 compared with 2007,” by lead author, Dr. Jude Capper, and collaborators Drs. Roger Cady and Dale Bauman.

At the request of the Journal of Animal Science, two of the original authors, Dr. Jude Capper, a livestock sustainability consultant, and Dr. Roger Cady, principal of Cady Agricultural Sustainability Specialties, performed a follow-up assessment to measure the subsequent progress made in the U.S. dairy sector in the 2007 to 2017 timeframe.

The results, Campbell said, show that the resources needed to produce the same amount of milk, field to farm gate were significantly lower in 2017 than in 2007.

According to the assessment, the effects of improved performance in the U.S. dairy cattle industry on environmental impacts between 2007 and 2017:

There was also a reduction in the amount of waste produced in 2017 versus 2007.

Although total milk production in the U.S. increased by 24.9% between 2007 and 2017, the total GHG emissions from milk increased by only 1%, according to this study.