Home » Join us for the National Soybean Nematode Conference 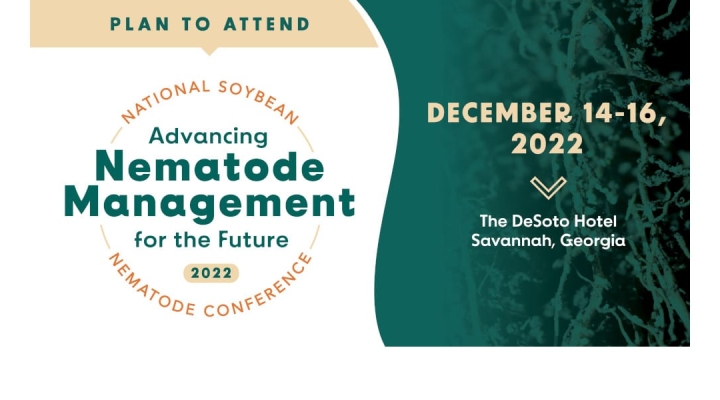 The National Soybean Nematode Conference will highlight the value and impact of research, the power of public/private partnerships and celebrate the fruits of that labor. (Courtesy Image)

WAUKESHA, Wis. — Defeating soybean nematodes takes an army and a multifaceted strategy, which is why we hope you join us for the National Soybean Nematode Conference (NSNC) to be held December 14-16, 2022, in Savannah, Georgia. The world’s premier event for soybean nematode research will take place at The DeSoto Hotel. We also set aside some time to explore the charming city.

The SCN Coalition and American Phytopathological Society look forward to welcoming academia and industry scientists, students, crop advisers, farmers, grower organizations, crop protection professionals, ag media and more. That multitude of perspectives is essential to the meaningful exchange of information and ideas as well as the development of a well-rounded plan for the future.

This conference will highlight the value and impact of research, the power of public-private partnerships and celebrate the fruits of that labor. These efforts save U.S. soybean farmers hundreds of millions of dollars each year.

Researchers have made advances in high-quality nematode reference genomes, discovered novel genetic resistance, advanced new seed treatments and are applying modern molecular tools for genetic modification of soybeans, to name just a few accomplishments. The National Soybean Nematode Strategic Plan (NSNSP) and The SCN Coalition that were developed after the 2016 conference have resulted in unified messaging and increased active management of soybean cyst nematodes (SCN) and other nematodes affecting soybeans.

“This conference will serve as a milestone for the many farmers, scientists and media specialists who have dedicated their resources to one of the most impactful public-private partnership and awareness campaigns in U.S. agriculture,” says Sam Markell, plant pathologist at North Dakota State University Extension and a leader of The SCN Coalition. “We hope to build on those efforts to expand or facilitate new partnerships that ultimately result in improved management tools and strategies that put more money in growers’ pockets.”

Now it’s time to plan for the future

“After managing SCN using basically one tool – SCN-resistant varieties with the same source of PI 88788 resistance – for 20 years, the pest has evolved. More aggressive SCN populations that can overcome our main management tool are now widespread,” explains Melissa Mitchum, molecular nematologist at the University of Georgia and NSNC chairperson. “Making farmers aware of this resistance to the resistance is critical, as is the need to advance new solutions for battling soybean nematodes, hence the theme of this year’s NSNC: Advancing Nematode Management for the Future.

“While SCN remains the No. 1 yield-grabbing pathogen of the soybean crop in North America, soybean farmers in the Southern U.S. face additional threats from lesion, reniform and southern root-knot nematode,” adds Mitchum. “This conference will cover and address the solutions needed for all parasitic soybean nematodes.”

The conference will also lay the foundation for the development for the next five-year strategic research plan, in addition to fostering the next generation of young professionals who will develop tools to fight nematodes.

What you can look forward to at the conference

The three-day event features a wide range of activities, including:

Participants can also look forward to several networking meals and a reception, as well as a dinner party. For more information about this important event, visit apsnet.org/NSNC. Mark your calendar!

View and share the “Save the Date” flyer with your network!

About The SCN Coalition
The SCN Coalition is a public/checkoff/private partnership formed to increase the number of farmers who are actively managing SCN. Our goal is to increase soybean farmers’ profit potential and realize higher yields. Partners in The SCN Coalition include university scientists from 28 states and Ontario, grower checkoff organizations, including the North Central Soybean Research Program, United Soybean Board and several state soybean promotion boards, and corporate partners including BASF, Bayer, Growmark, Nufarm, Pioneer (Corteva), Syngenta, Valent and Winfield United.

The Business of Maple at the Arnot Research Forest & Maple Lab