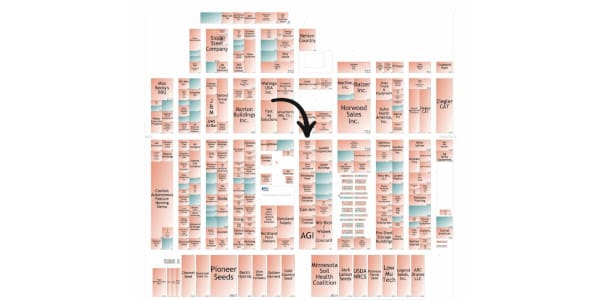 Together again at booth 620. (Courtesy of Minnesota Soybean)

MANKATO, Minn. — Together again at booth 620. After a year without traditional farm trade shows, Farmfest and Big Iron – the region’s most popular ag trade shows – are welcoming people back. And Minnesota Soybean is settling into the driver’s seat.

“It’ll be great to be back at Farmfest this year to see farmers, legislators and industry leaders,” Council CEO Tom Slunecka said. “Minnesota Soybean has a long tradition of being there and we are excited to return.”

Minnesota Soybean’s booth (620) at Farmfest will highlight soy oil uses, shown through different projects and demonstrations. The booth continues to showcase how RePlay road sealant holds up to Minnesota’s weather on the asphalt in the tent. Attendees will be walking on soy – literally. The Council will also be displaying its Plasma Blue unit at Farmfest for the first time.

The Council will be revving up its Driving Soy campaign, a summer-long event that Minnesota soybean checkoff dollars helped fund to promote the diverse uses of soy oil, while also giving back to their local sheriff’s departments. Visitors can nominate a non-profit to win a set of soy-based tires, plus register to win a set themselves after completing a scavenger hunt to learn more about soybeans. Completed scavenger hunt cards can be turned in to win a set of Goodyear’s soy-based Assurance WeatherReady tires, or one of MSGA’s Far[MN] shirts.

The MSGA section of the booth will feature their custom-built soy-based 8-by-18 foot Outdoor Getaways all seasons fish house. Raffle tickets can be purchased in the booth for $100 for a chance to win the fish house and support MSGA’s mission. Only 500 tickets will be available. Not an MSGA member yet? Visitors can sign up for a membership during Farmfest. Those who sign up or renew a membership (or are already active) at Farmfest can enter in a drawing to win a generator.

MSGA will also be discussing its legislative successes and priorities with elected officials and state agency leaders. Recently elected President Mike Skaug, along with a team of farmer-leaders, will be on hand to visit with legislators.

“After a year of virtual advocating, we’re all looking forward to face-to-face interactions with active and prospective members, along with legislative leaders,” Skaug said.

Potato sales at retail from April to June 2021