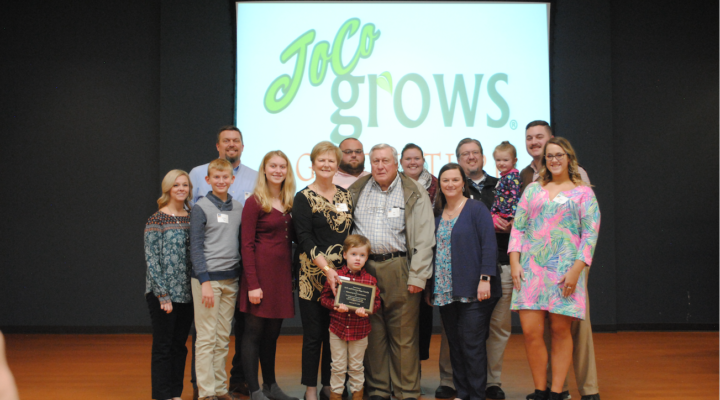 Also included in Farm-City Week celebration is the Hungry to Help food drive benefiting Backpack Buddies. Sponsored by Johnston County 4-H and Johnston County FFA Chapters, the winning 4-H club and FFA chapter that collected the most food by weight received a $100 prize. The winning groups were Animal Adventurers 4-H Club and South Johnston High School FFA. Food was also collected the night of the banquet, with all donated items going to the Backpack Buddies programs at West Smithfield Elementary and Selma Middle School. The total amount of food collected this year for the Hungry to Help food drive was 1,489 pounds.

Every year the Johnston County Farm-City Week committee recognizes families or individuals from the county that have made significant contributions to the local agricultural economy through either agribusiness or farming. This year the committee recognized Bobby and HT Pope Family of the Kenly community, and HM Johnson Family of the Strickland’s Crossroads community.

Bobby and HT Pope of Pope Brothers Farm are the sons of Henry Thomas, Sr. and Zelma Godwin Pope. Bobby was born in 1935 and HT in 1944 and both graduated from the Glendale School in 1953 and 1962, respectively. 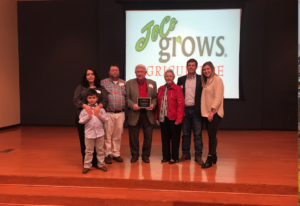 Right after High School, Bobby went to Norfolk, Va. and worked at RJ Reynolds approximately one year, then for a tobacco company in Wilson and later Blue Flame Gas Company in Kenly. Bobby and Lena Durham, his high school sweetheart, were married in 1954, and He was drafted into the Army in 1958 and served through 1961. Later, he was called back into the National Guard during the Berlin Crisis. After returning home, Bobby went back to work for Blue Flame.

After graduating from Glendale, HT attended the Atlantic Christian College School for Accounting and Business Administration where he graduated in 1967. While attending college,

HT also married his high school sweetheart, Frances Grice in 1964. After graduation, he worked for Gene Stone, an accountant for one tax season, then joined the National Guard and went to Fort Dicks, NJ where he completed basic training. In 1968, HT went to work for Sylvania in Smithfield where he worked until 1972. At that time, he decided to leave Sylvania, and start farming. Bobby and HT later decided to farm together and started the Pope Brothers Farm in January of 1974. While farming, H.T. also served as a substitute mail carrier from 1972-1982, and then as a regular mail carrier from 1992 until 2007.

The Pope brothers started out growing Tobacco, Corn, Beans and Wheat and mostly stuck with these crops over time. As they were able, they leased more farms and also brought a few farms. As time progressed, they purchased more land and tobacco quota which they felt was a good investment and business decision. Ultimately their objective was to have a high ratio of tobacco acres compared to the total amount of land that they were farming while maintaining a good crop rotation.

They consistently sought new technology to make the farm profitable and efficient. The Pope brothers were the first to own and use bulk barns and later box barns in their community. Over the years they updated their equipment and adopted mechanical harvesting and greenhouse transplant production.

The biggest challenge that they faced was staying profitable on the farm, but they were successful to continue the farming operation a total of 46 years. HT decided to retire in 2010 and sold his 1⁄2 of the farm operation while Bobby and his son Brent continued the operation until 2018.

Brent graduated from NCSU, and was an integral part of the farm operation for many years in spite of the challenges of being diagnosed with juvenile diabetes at age 2. Brent believes that working on the family farm helped him remain active and healthy in spite of the disease. However, ultimately the disease took a toll on Brent having open heart surgery, dialysis and later a kidney transplant necessary. Susan Pope Oldham graduated from UNCW, was instrumental in helping Brent receive the best treatment for his diabetes, and was also instrumental in him getting an insulin pump in 1999. Ronald Renfrow, a family friend donated a kidney so that Brent could receive a kidney transplant in November 2014, and act of kindness for which Brent and his family are eternally grateful. Unfortunately, Bobby and Lena’s daughter Susan was lost at a young age but both she and her children are treasured by the Pope family.

HT and Frances have 2 sons, Michael and Allen who helped on the farm before graduating from NC State University and Campbell to pursue other careers.

Brent mentioned that their community and neighbors always worked together and helped one another out. Frances and Lena helped out on the farm when they could and they both worked away from the farm also. Mrs. Lena Pope worked for KS Bank for 40 years and Mrs. Frances Pope worked at Watson Electric Co for 12 years and then the Glendale-Kenly School for 37 years.

The families are active in their communities and churches. Bobby and Lena attend Kenly Free Will Baptist Church and HT and Frances attend Holly Spring Free Will Baptist Church and have all served in many roles there. HT also served on the Johnston Co. Board of Education. Bobby Pope also served on the USDA Farm Service Agency County Committee, East Carolina Farm Credit Board, and the Johnston Extension Advisory Council. Both Bobby and Brent have served as Volunteer Fire Fighters for more than 48 years collectively.

The Pope family has many children, grandchildren, siblings, workers and friends that they credit with being a part of their blessing and success in life.

H.M. Johnson, III lives, farms, and operates a welding and repair shop in the Strickland’s Crossroads Community. He is the son of Dennis and Imojean Johnson. He and his wife Sherry were both born and raised on the farm, and farm life is all they have ever known. 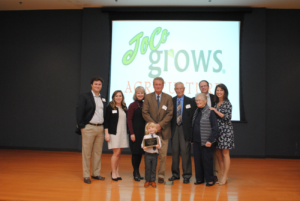 The family history in agribusiness and supporting the farm community goes back generations. Henry M. Johnson, II, H.M.’s grandfather, was an agribusiness leader in the Four Oaks Community. He owned a country store at Strickland’s Crossroads and later a general merchandise store and fertilizer business in Four Oaks. In 1950, he started a Massey Ferguson Tractor dealership he operated until 1969. H.M. still has a 1950 MF T020 tractor, one of the first the dealership got and was purchased by his Dad, Dennis. Around 1959, Henry M. Johnson, II started Fours Oaks Milling and Packing Company. H.M. started working in the store in Four Oaks at age 12, cutting meat and at the meat processing company while he was in high school. At age 15, he had his first tobacco crop on halves with his Grandfather. Henry M. Johnson, II also served all of Johnston County as a County Commissioner from 1948 to 1968 as well as Chair from 1957 until 1968.

Dennis M. Johnson farmed and started building livestock trailers and doing other welding in the winter. H.M. grew up helping on the farm and in the welding shop and has continued to serve the farm community. The farm is called Dennis M. Johnson and Son, while the welding and repair business operates today as H.M. Johnson Welding.

In the 70’s and thru the early 2000’s Dennis and H.M. grew 50 acres of tobacco and rotated with corn and soybeans. They have worked closely with Extension and NC State University with soybean test plots. They were early adopters of new technology and labor- saving practices. They mechanized transplant production on the farm first with precision seeding and undercutting plant beds and then owned the first tobacco transplant greenhouse around 30 years ago. Always trying to reduce labor they were also early to transition to mechanical harvest to reduce costs. H.M. was selected as a 1987 state semifinalist in the Philip Morris Outstanding Young Tobacco Farmer program.

In 2007, H.M. decided to stop growing tobacco and focus more effort in the welding shop. Over the years, he started building ornamental iron rails for porches and steps. He has provided these for several custom builders in the area and they have become an important part of the business. He has also built tobacco balers, 16-foot trailers for the nursery industry, tobacco box trailers, and dump boxes. They also rebuild and repair hydraulic cylinders for farm equipment, industrial equipment and have even tackled large cylinders from a well drilling rig. H.M.’s father Dennis is still helping in the shop, and H.M. says that he is still one of the best stick welders around.

H.M. met his wife Sherry Smith Johnson in high school in 1970. Their first date was at the NC State Fair, and they have not missed a NC State Fair for 48 years. They graduated from South Johnston High School and got married in November of 1975. They have two children, Dennis Perry Johnson married to Kelley, and Myra Parker married to John Parker. Myra and John have one son, William Henry Parker, who will be 4 years old in January.

Sherry Johnson graduated from Atlantic Christian College in 1979 with a Bachelor’s degree in Accounting and a minor in Education. She is the managing partner of the Dunn office of Bernard Robinson & Company, L.L.P., a CPA and advisory firm serving clients and their businesses throughout the Southeast. Their daughter, Myra, works as a CPA manager with the same company. Sherry is also a charter member and past president of the Dunn-Erwin Rotary Club.

H.M. has served Strickland’s Crossroads Fire Department as a volunteer member for 43 years and as Chief since 1998. H.M. is on the Johnston County Fireman’s Honor Guard and Sherry serves on the Fire Department Ladies Auxiliary. They attend Antioch United Methodist Church where H.M. is the Administrative Council Chairperson, serves on the Board of Trustees, and the Finance Committee. Sherry is a member of the Church United Methodist Women and is chair of the Finance Committee.

H.M. is known for trying to help people who are in need.

The Johnston County Farm-City Week Committee is proud to honor Bobby and HT Pope and HM Johnson for their outstanding contributions to the farmers and consumers of Johnston County. They exemplify what Farm-City Week is all about, the partnership that puts food on the table of American families.