Home » Johnny Appleseed: The fact and fiction on the folk legend
Hansen's Histories 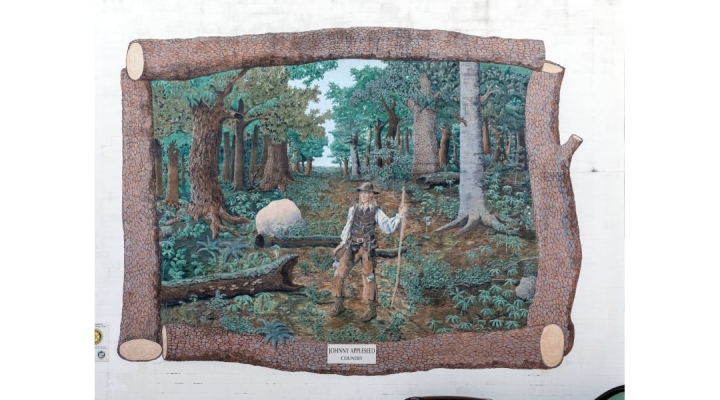 GREENWICH, N.Y. — As we near the fall season apple orchards will be opening up for the classic autumn activity of apple picking. When thinking about apples one figure usually comes to mind: Johnny Appleseed. The rag-wearing wanderer has achieved mythic status in American folklore alongside the likes of Paul Bunyan, John Henry, Pecos Bill, and other figures, but who was this man? Let’s determine some of the fact and fiction surrounding Johnny Appleseed.

The real name of Johnny Appleseed was John Chapman, and he was born September 26, 1774 in Leominster, Massachusetts to parents Nathaniel and Elizabeth Chapman. Much is unknown about Chapman’s childhood. Champman’s mother died when he was almost two years old while his father was away fighting with the Continental Army in the American Revolution. It is presumed he and his older sister, also named Elizabeth, lived with relatives afterward. Upon returning from the war, Nathaniel married Lucy Cooley and the family moved to Longmeadow, Massachusetts. The couple had 10 children together, however it is unclear how much John and Elizabeth were integrated into Nathaniel’s new family.1

Sometime in the 1790s Chapman along with one of his half-brothers, named Nathaniel, moved to western Pennsylvania. His name appears in trading post records from Northwestern Pennsylvania that date to 1797. Other unconfirmed stories place him in the Wyoming Valley of northeastern PA and southwestern PA counties.2 Some stories say he was an apprentice to an orchardist as a teenager. Whether it is true or not, fruit trees seemed to be a passion of his from a young age. He planted his first orchard in Warren, PA, and later moved to the Pittsburgh area where he began collecting leftover apple seeds from the cider mills near the city to sell to settlers moving west.3

Chapman soon made his way further west into Ohio beginning in the early 1800s. Contrary to the image of him simply flinging seeds wherever he went, John actually planted and tended nurseries of apple trees. There was a market for apple trees at this time. Settlers were moving into what was called the Northwest Territory, a large area of land that included what would become the states of Ohio, Indiana, Illinois, Wisconsin, and Michigan. The Ohio Company of Associates was giving 100 acres of land to homesteaders who were willing to make a permanent settlement in the wilderness areas. Part of the requirement was that 50 apple trees and 20 peach trees be planted on a property in within three years, so settlers were in need of trees. John had a knack for knowing where settlement would be taking place next and would get to these areas ahead of settlers and plant nurseries so saplings would be available to purchase. Apple trees were also used as boundary markers and fruits used as livestock feed.4

Apple trees were also a desired commodity in order to make hard cider. Hard cider was the drink of choice in early America. It would have been an everyday item on a family’s table. This was especially true on the frontier where it was a safer beverage to drink than water much of the time. Most of the trees that Chapman planted were from seed meaning they had a more bitter taste and were grown for the purpose of making cider, while trees grown from grafting make apples for eating.5

In the winter of 1804-1805 the rest of the Chapmans joined John in Ohio settling near present-day Marietta. From this time to the mid-1820s John’s work focused in the region of Richland, Ashland, Wayne, and Knox counties in Ohio. Later on, as settlement crept further west, his work took him to northwestern Ohio and by the 1840s he was very active in northeastern Indiana.6 In all of his travels he always returned once a year to Pittsburgh to spend the winter and replenish his seed supply.7

Chapman’s somewhat nomadic lifestyle is where many of the eccentricities that he is remembered for come from. He was described as small and wiry with incredible endurance from all the walking that he did. He was known for his wilderness skills and would often sleep outside while on his travels. He did in fact wear worn out clothing or coffee sacks with holes cut into them and some kind of hat on his head.8 Unlike many illustrations he likely did not wear a pot or kettle on his head as this would have been rather heavy on him. His shoes, if he wore any at all, were usually old and worn.

Chapman was a follower of the Swedenborgian religion (also called the Church of the New Jerusalem), a religion based on the teachings of Swedish philosopher, scientist, and theologian Emanuel Swedenborg. Chapman was somewhat of a missionary of Swedenborgianism often stopping in settlers’ cabins to “spread some fresh news from Heaven” as he liked to say. Some of Chapman’s other defining features stem from following this religion like his simplistic lifestyle which came from the belief that the more he suffered in this world, the more happiness he would experience in the afterlife. Kindness to animals and plants was another belief which led him to not graft trees or hunt.9

Overall Chapman was also known for his generosity giving away seeds when families could not afford it. Though sometimes depicted as a hermit he knew many people and could get along with anyone from ordinary farmers to Native Americans to prominent town figures. He could be considered a conservationist and sought to be a good steward of the land.10

Chapman died on March 18, 1845 in Fort Wayne, Indiana from pneumonia. While the exact location of his grave is disputed, it is likely in a section of Johnny Appleseed Park in Fort Wayne where a monument honoring him stands today. While he lived simply Chapman died a rich man having been a successful businessman. At the time of his death he owned or long-term leased 1,200 acres of land across Ohio and Indiana.11

Chapman was not referred to “Johnny Appleseed” until very late in his life and after his death. The legend surrounding Chapman’s life grew after an 1871 article on him in Harper’s New Monthly Magazine written by W.D. Haley. This article included some extraordinary tales about him which added to his image and mystique. The legend grew all the more after the 1948 Disney film Melody Time featured a segment on the life of Johnny Appleseed in the way he is often remembered nowadays.12

Today, he remains relevant through countless books and stories. There are events that celebrate him like annual Johnny Appleseed festivals in Indiana, Ohio, and Pennsylvania. Seedlings from the last known apple tree planted by Johnny Appleseed were transplanted to the Johnny Appleseed Education Center and Museum in Urbana, Ohio in 1999 where they continue to grow today. He remains an important historical and folk hero in the areas he lived and worked- tall tales and all.

The significance of a tree