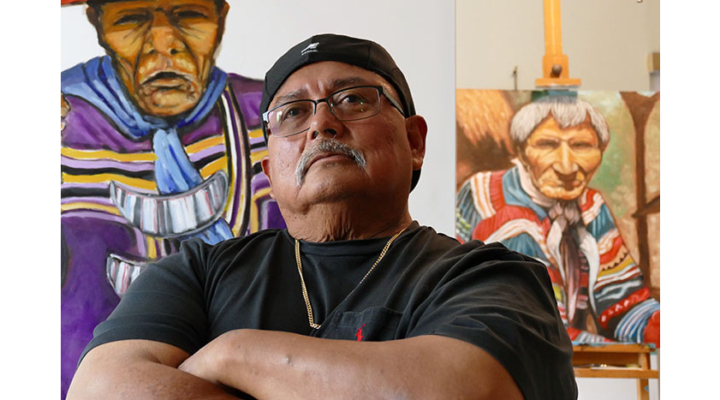 TALLAHASSEE — An oil painting created by artist Jimmy Osceola depicting Seminoles at Lake Okeechobee won the USDA’s Natural Resources Conservation Service poster contest in August. The theme of the competition was “Water is the Essential Element.”

Osceola’s painting, titled “Big Water of Life”, will be printed on posters and distributed to the United States Department of Agriculture’s NRCS offices throughout the U.S., Indian Country and the Pacific Islands for American Indian Heritage Month in November. 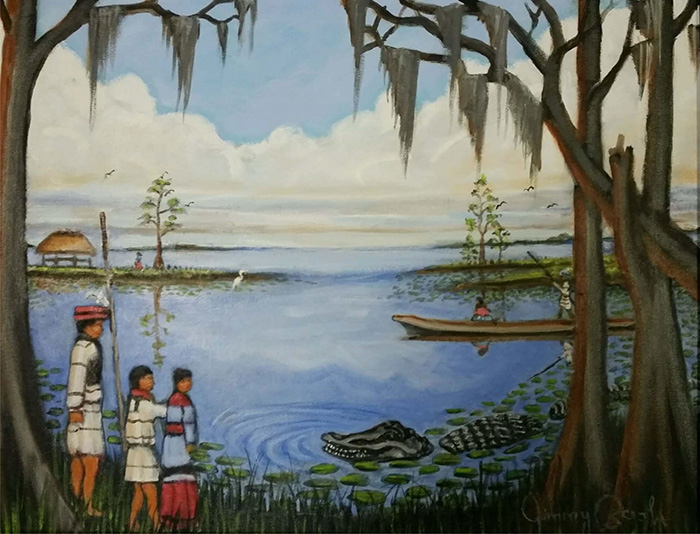 “Being a tribal member and Native American is the most inspiring thing to me,” said Osceola, of Plantation. “When I was painting it I wasn’t thinking about winning, I just thought that as a Seminole of Florida, showing the lake would be good for heritage month. I think water is an important subject.”

Osceola painted the scene from memory, having spent countless hours at the lake over the years. Per contest rules, he incorporated cultural elements into the piece, including a dugout canoe, chickee, traditional clothing and an alligator lurking near the shore.

A self-taught artist who discovered his passion for painting about 20 years ago, Osceola is inspired by other tribal artists. His artwork provides a window to the past and portrays traditional camps, warriors and stomp dancers.

Osceola’s pride and respect for the land and the Tribe are reflected in the paintings.

Eight paintings from five Native American artists living in Florida were submitted to the contest. The artwork was judged on creativity, originality, portrayal of heritage and culture of American Indians in Florida, incorporation of title and theme, artistry and skill.

“There were some close votes between the entries, but overall Jimmy’s stood out in artistry and skill, as well as the portrayal of the heritage and culture of American Indians in Florida,” NRCS American Indian/Alaska Native Special Emphasis Program manager Katy Greene wrote in an email to the Seminole Tribune.

Artists were required to write a narrative of their work with their submission to the contest.

“As in the beginning of our being as Seminoles in Florida, water was essential to our survival for food, shelter, clothing, travel. Today water still is and always will be essential for the survival of all mankind,” Osceola wrote.

The poster contest, which began in 1991, showcases Native American talent in one state each year. To date, 20 states have been featured.