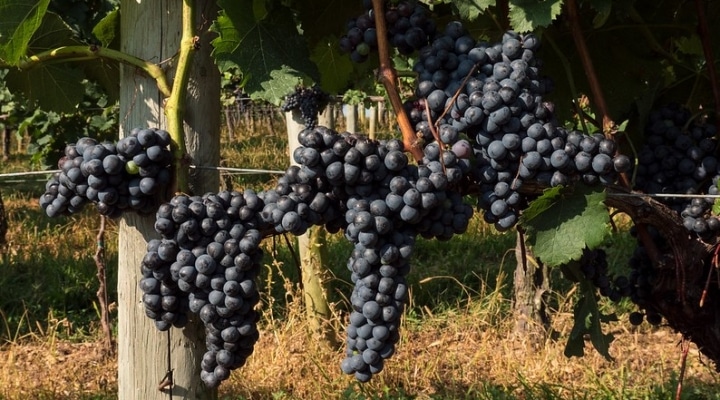 Rich Smith and wife Claudia Alexander Smith owned Paraiso Vineyards and Smith Family Wines in California’s Santa Lucia Highlands AVA. Rich was widely known for his passion for the wine and grape industry, his commitment to its future, and his collaboration with colleagues to achieve collective goals. (U.S. Department of Agriculture, Public Domain)

SACRAMENTO — In a surprise presentation, the fourth-annual Rich Smith Distinguished Service Award for major contributions to the American grape and wine industry was given to Jim Trezise. Trezise is former President of the New York Wine and Grape Foundation and current President of WineAmerica.

The Smith Family gave the award during the Annual Leadership Luncheon of the Winegrape Growers of America held during the Unified Wine & Grape Symposium, the industry’s largest conference and trade show. WGA co-sponsors the award with the National Grape Research Alliance and WineAmerica. The late Rich Smith was a founding member and guiding force in each of the three groups.

Rich Smith and wife Claudia Alexander Smith owned Paraiso Vineyards and Smith Family Wines in California’s Santa Lucia Highlands AVA. Rich was widely known for his passion for the wine and grape industry, his commitment to its future, and his collaboration with colleagues to achieve collective goals. Passion, commitment, collaboration, are inscribed on the award, which annually goes to a person who emulates Smith’s defining traits and works tirelessly for the common good.

Smith’s wife Claudia presented the award saying, “Rich and I spent many a day with Jim while he was at the New York Wine & Grape Foundation. He was an impressively articulate, sensitive and thorough advocate for the Foundation and for American wine production, consumption, politics and marketing, through representation and participation in each of these three groups. He has been in tandem with Rich through many years of wine/grape promotion and politics and very deserving of this Rich Smith Award.”

Since March 2017, Trezise has served as President of WineAmerica, the national association of America wineries whose mission is to encourage dynamic growth and development of American wineries and winegrowing through advancement and advocacy of sound public policy. Prior to his service with WineAmerica, Trezise was President of the New York Wine and Grape Foundation for 31 years. While there he served on the WineAmerica Executive Committee for more than 20 years.

Trezise started his career in the wine industry in 1982 when named Executive Director of what was then known as the New York State Wine Growers Association, then transitioned to President of the New York Wine Council and in 1985 created the New York Wine and Grape Foundation. Under his leadership, the New York wine industry grew from less than 40 wineries to more than 400. In 2014 Wine Enthusiast named New York the International Wine Region of the Year.

Trezise has received national awards for his contributions to the American wine industry, including the ”Grand Award” of the Society of Wine Educators; the “Wine Integrity Award” from the Lodi Winegrape Commission; the “Distinguished Service Award” from the American Society of Enology and Viticulture; and the “Perpetual Monteith Trophy” (Thomas Jefferson Cup) from the Atlantic Seaboard Wine Association.  He was also named one of “The 20 Most Admired People in the American Wine Industry” by Vineyard & Winery Management magazine; and one of the “Top 50 Movers and Shakers” by Wines & Vines magazine. He was also just named one of Wine Industry Network’s 2020 Most Inspiring People.

Trezise served on various boards including WineAmerica, National Grape Research Alliance, FIVS and was past president of the International Riesling Foundation. He is a frequent speaker at industry conferences and serves as judge for wine competitions around the world.

Marty Clubb, Owner of L’Ecole No. 41 Winery in Walla Walla, Washington, and current WineAmerica Board Chair said, “I can think of no one more deserving of this award than Jim Trezise.  He has been a passionate and inspiring cheerleader for nearly four decades.  Jim’s positive attitude, tireless promotion, and congenial advocacy inspires the entire wine industry.”

Vicky Scharlau, Executive Director of WGA, said, “Jim fosters collaboration and through his work in New York and with WineAmerica has nurtured a community of and for the grape industry.  Jim is a true advocate and spokesperson for the American wine industry and can always be counted on pursuing the goal of unity.”

Donnell Brown, President of NGRA, said, “Jim is all about solutions. Whatever problem or issue presents itself; Jim can be counted on to roll up his shirtsleeves to find the best, most effective way forward for all involved. It is a trait that makes him an invaluable member of the NGRA Board of Directors. As we mobilize research to address the industry’s greatest challenges, Jim has been a consistent and thoughtful force for the advancement of the industry—through science, public policy, publicity or all of the above.”

John Martini, first Rich Smith Award recipient and longtime friend of Trezise summed it up, “Jim was a primary mover of the New York grape and wine scene – working in Albany to adjust the prohibition era rules and regulations – touting the wines of New York at competitions – herding the cats of the industry – and living the dream job with no hassles, no hurdles and no bullshit.”

Vacancies on Industrial Hemp Advisory Board