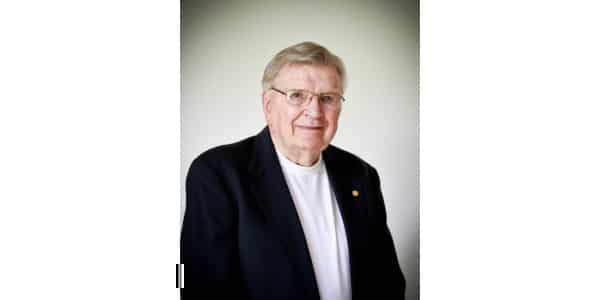 Jerry Parsons has been inducted into the National 4-H Hall of Fame. (Courtesy of ISU Extension and Outreach)

AMES, Iowa — Jerry Parsons of Ames, Iowa, was inducted into the National 4-H Hall of Fame on Oct. 14 in Washington, D.C., for his lifetime achievements and contributions to 4-H.

Honored by Iowa State University and the Iowa 4-H Youth Development program, Parsons was one of 16 people inducted during the ceremony held at the Kellogg Conference Hotel at Gallaudet University.

The National 4-H Hall of Fame honorees are nominated by their home states, National 4-H Council; the National Association of Extension 4-H Youth Development Professionals; or the Division of Youth and 4-H, United States Department of Agriculture/National Institute of Food and Agriculture based upon their exceptional leadership at the local, state, national and international levels.

After serving in the United States Navy, in 1954 Parsons took a position with the Cooperative Extension Service at Iowa State University as a youth assistant in Jones County. From 1957-1959 he had a temporary assignment on the State 4-H staff before he returned to the field to serve as a county and area 4-H staff member. Parsons was then promoted to assistant state leader (1961-1968) for 4-H and Youth programs. During this time, he worked with the merger of the Iowa boys and girls 4-H programs. He also provided leadership for professional youth staff training programs. In 1968, he became the campus coordinator for foreign contracts and an instructor in the Department of Family Environment at Iowa State University.

Parsons left Iowa State University and joined the staff at North Carolina State University as associate professor (1970-1977) of adult and community college education and state training leader (1970-1977) for the Agricultural Extension Service. During his time at North Carolina State University, Parsons directed a national research and development project, creating staff and volunteer training materials related to the use of incentives in 4-H. Ten learning modules were developed and released through regional and national workshops. Parsons also served as editor of the Journal of Extension, and for three years was graduate administrator for the Department of Adult and Community College Education.

Parsons joined the faculty at Kansas State University (1977-1979) where he worked with the adult and continuing education programs. He served as director of the National Adult Education Institute and participated in numerous extension and adult education activities and associations.

In 1980 Parsons returned to Iowa State University as state leader (1980-1988) for 4-H and Youth programs. During these eight years the staff developed and emphasized new methods of reaching Iowa youth in addition to the traditional club settings. He challenged state and field staff to think innovatively while enabling them to make changes in existing programs and to plan for future 4-H directions. Parsons led the efforts to move toward issues-based programming, including programs for youth at risk and environmental programs for urban youth. He assisted with realignment of the purposes and goals of the Iowa 4-H Foundation and the 4-H Camp. He also led the 4-H Youth staff through changes in staffing patterns.

Parsons served on state 4-H program review committees in Wisconsin and Kansas, chaired a national 4-H task force and two national 4-H staff development workshops, was a member of the Extension Committee on Policy 4-H sub-committee, presented staff training workshops in three states and served as a trustee on the Iowa 4-H Foundation board.

After retiring in May 1988, Parsons continued to stay involved with 4-H work and served as project director for the National 4-H Recognition Model Design Team and lead author of the facilitator guide and training materials, published in 1995. This team developed the 4-H recognition model still used today, and the training modules to guide implementation across the Cooperative Extension System.

Throughout his career Parsons was active in his community. His community involvement has included serving on the board of directors for the Iowa Arboretum, an active member of the Presbyterian Church, member of Kiwanis, and service to many youth and community organizations.