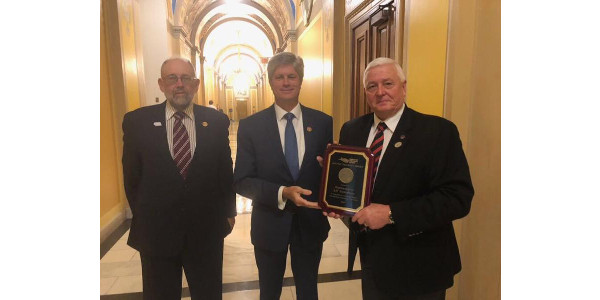 LINCOLN — Nebraska Farmers Union (NeFU) presented Representative Jeff Fortenberry with the Golden Triangle Award, National Farmers Union’s (NFU) highest legislative honor. The award was presented recently as part of the annual NFU fall Fly-In that brought 380 Farmers Union members from across the country to Washington, DC to share their views and concerns with their elected officials. Fortenberry was one of 26 House and Senate members honored this year.

The Golden Triangle is an annual award presented to members of Congress who have demonstrated leadership and support policies that benefit America’s family farmers, ranchers, and rural communities.

jpeg-imagThe Golden Triangle, first presented in 1988, symbolizes the core principles of the Farmers Union: education, cooperation, and legislation. This year’s Golden Triangle honorees were selected for their leadership and contribution to several issues important to family farmers and ranchers.