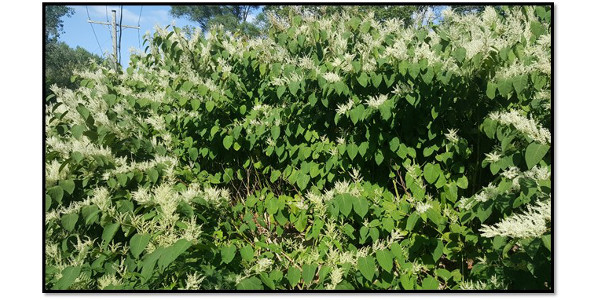 PAW PAW, Mich. — The SW X SW Corner Cooperative Invasive Species Management Area (CISMA) has been busy promoting awareness for Japanese Knotweed, a troublesome invasive species that is currently impacting Southwest Michigan. The CISMA has been working with homeowners, local municipalities, land managers, and concerned individuals who recognize the importance of dedicated efforts to stop knotweed from degrading natural habitats and private property. The CISMA hosted a symposium in the City of St. Joseph last Spring and most recently in August in the City of New Buffalo. There have also been multiple workshops and events held throughout Berrien, Cass, and Van Buren Counties to educate the public on knotweed impacts. Public recognition of knotweed is a crucial step to ensuring that it does not become a common species on the landscape in the region. Japanese knotweed can be easily identified by its tall hollow stalks that resemble bamboo and white flowers that are in bloom from August-October.

Japanese Knotweed is a species that is adapted to volcanic regions of Japan and it has unique adaptations that make it a particularly problematic outside of its native range. Knotweed is an early successional species in sites disturbed by volcanic activity and is eventually replaced by competing plant species. There are also a plethora of native insects and fungi that control the growth and proliferation of knotweed in Japan. Outside of its natural range Japanese Knotweed outcompetes native plant species with its rapid growth and ability to emit chemicals in the soil that inhibit other plants from growing. Its adaptation to volcanic sites gives the plants expansive root system the ability to survive dormant for up to 20 years. Knotweed is well known for growing through asphalt, brickwork, concrete and in some cases inside homes. The ability to impact both natural ecosystems and public infrastructure is why it is important to control this invasive species. Another problem with knotweed is that it is easily spread by moving plant matter, root material, and can reproduce by seed in some populations. A piece of the root or stem the size of a thumb nail can put down roots, and become an entirely new population of knotweed. Because of this, mowing, digging, and pulling can all spread knotweed further, rather than treating the infestation.

The difficulty with knotweed is there is no clear-cut method that can be employed to control the plant and eradication efforts take a minimum of 4-5 years. Another issue is not all site conditions are the same and there are numerous factors that must be considered when controlling this species. The local conservation districts have Japanese Knotweed injectors available that are effective at delivering herbicide to the root system of the plant. They can be rented for a deposit of fifty-dollars and they are useful in areas with desirable native plants and there is a lower risk of damage to nontarget plants. September-October is the perfect time of year to treat knotweed because it is directing its energy reserves to the root system as the plant cannot survive above ground in winter.

The CISMA will continue to promote awareness of invasive species and assist the public as a resource for invasive species education. Japanese Knotweed is a significant problem but with dedicated effort and awareness it is an issue that can be addressed. There has been positive cooperation among the CISMA and local municipalities and interest from concerned residents. For invasive species inquiries and information on Japanese Knotweed injectors please contact your local Conservation District Invasive Species Educator.

The SW x SW Corner Cooperative Invasive Species Management Area is a partnership of federal, state, and local government agencies, individuals, and various interested groups that manage (or have a stake in managing) invasive species in Berrien, Cass and Van Buren Counties. Partners include the Berrien, Cass and Van Buren Conservation Districts, Chikaming Open Lands, Southwest Michigan Land Conservancy, The Stewardship Network and many others.

Strengthening trade for the wheat industry