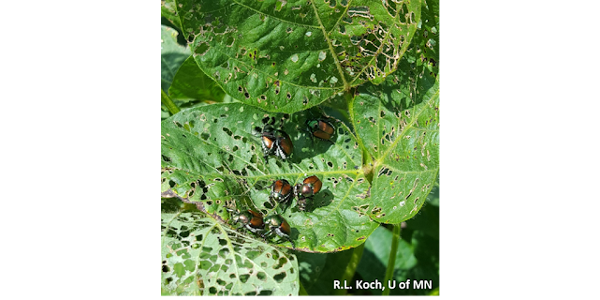 MINNEAPOLIS — In parts of southeastern Minnesota Japanese beetle has been actively feeding on soybean. These large beetles with shiny green- and copper-colored bodies, chew small holes in the leaves leaving a lace-like appearance ( see image 1). Japanese beetles will also feed leaves and flowers of many other plants, including silks of corn. Japanese beetle abundance and activity is most intense through July and August, but some individuals will remain active into fall. Here, I briefly review scouting and thresholds for management of Japanese beetle in soybean.

Treatment thresholds for Japanese beetle in soybean are 30% defoliation prior to flowering and 20% defoliation after flowering. These defoliation estimates are for the entire soybean canopy, not just the top leaf or two of the plants where the beetles tend to aggregate. Soybean is a very resilient plant and tolerant of defoliation. Economically significant yield losses are not expected at these threshold levels. Treatment at these thresholds should prevent an actively feeding infestation from reaching levels that could cause economically significant losses.   To obtain an estimate of the level of defoliation for a field:

If threshold levels of defoliation are reached and Japanese beetles are still present, most labeled insecticides will effectively suppress this pest (follow instruction on the insecticide label). When multiple defoliating pests occur (e.g., Japanese beetle and green cloverworm), defoliation from both pests should be combined and related to the thresholds mentioned above. After treatment, continued scouting is required because this mobile pest can recolonize previously treated fields.