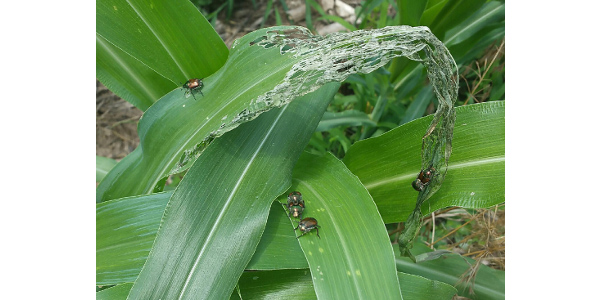 LINCOLN — Japanese beetle adults are beginning to emerge in eastern Nebraska. Their distribution has been increasing in Nebraska the last few years and they are being seen in corn and soybeans more frequently (Figure 1), in addition to feeding on landscape trees and shrubs. They will continue to emerge for the next few weeks. First identified in counties along the state’s eastern border several years ago, the beetles were found as far west as Lincoln County in 2016 (Figure 2).

Japanese beetles have one generation per year. They often feed in clusters due to an attraction to the female sex pheromone and an attraction to volatile chemicals produced by damaged plants.

Japanese beetles (Popillia japonica Newman, Figure 3) can contribute to defoliation in soybeans, along with a complex of other insects, such as bean leaf beetles, grasshoppers, and several caterpillar species. They feed by skeletonizing the leaves, leaving only the leaf veins. In soybeans insecticide treatment is recommended when insects are present and damage is expected to exceed 30% defoliation in vegetative stage, and 20% in reproductive stage soybeans. For more information see Managing Soybean Defoliators, NebGuide G2259.

Be aware that Japanese beetle numbers are often highest on field margins, so scout across the whole field before making a treatment decision. Japanese beetle adults are about ½ inch long and have a metallic green head and thorax. A key characteristic is a series of white tufts of hair on each side of the abdomen.

A variety of insecticides labelled on corn and soybeans would be expected to provide control of Japanese beetles. See product labels or the Insecticides for Field Crops section from Nebraska Extension EC130 for rates and restrictions.

In some cases people have mistaken the Japanese beetle for its look-alike, the false Japanese beetle, or sand chafer, Strigoderma arboricola, which is a native Nebraska insect found across most of the state. Sand chafers (Figure 4) are commonly found along the Platte River valley and other river valleys in Nebraska. False Japanese beetle adults are about the same size as Japanese beetles, but do not have a metallic green head. They may vary in color from coppery brown to black. They may have some white hairs on the side of the abdomen but they are not organized into tufts of hair.