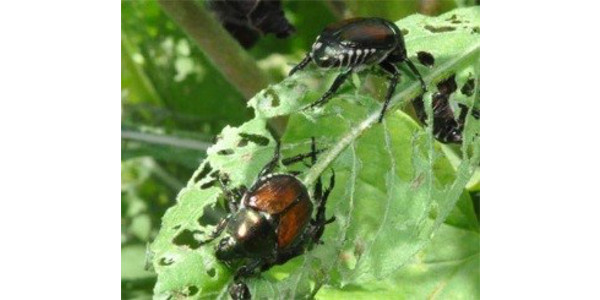 LEXINGTON, Ky. — After a wave of damage during their spread across the state, Japanese beetle (Figure 1) numbers dropped and stabilized at generally tolerable levels. Occasional population resurgences can occur so this is an insect that cannot be forgotten. The 2017 brood is beginning to emerge and should be watched to assess its damage potential.

Soil moisture, especially from June through August, is a major factor affecting Japanese beetle populations. Female beetles prefer to lay their eggs in moist soil. These eggs must absorb water in order to hatch. Increases in late summer rainfall favor this insect but impact varies locally.

Rainfall from June through August (Figure 2) has a major impact on Japanese beetle survival. Statewide averages for those periods for 1996, 2006, and 2016 have been 10.5, 14.6, and 16.3 inches, respectively. June rains loosen the soil to enable beetle emergence; July and August precipitation fosters egg hatch and survival or early instar larvae. This contributes to increasing population in areas that receive rain.

The status of the Japanese beetle, along with masked chafers, should become clear soon. The next rain that loosens soil will stimulate their emergence.