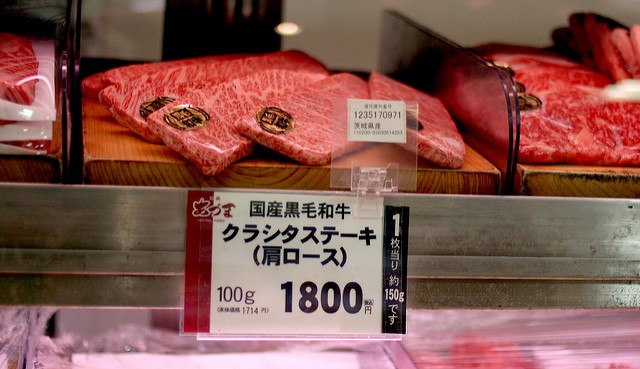 Japan has been facing U.S. pressure, which has grown stronger under the administration of President Donald Trump, to eliminate the current age restriction, in place since 2013 amid concern over bovine spongiform encephalopathy, also known as mad cow disease. (Christian Kadluba, Flickr/Creative Commons)

TOKYO — A research panel of Japan’s food safety commission said Thursday that safety would be assured even after the removal of import restrictions on U.S. beef imposed to counter mad cow disease.

The findings will be reported to health minister Takumi Nemoto, after a month of eliciting public comments, setting the stage for the Japanese government to eliminate the current restrictions that only allow imports of U.S. beef from cattle aged 30 months or younger.

The Health, Labor and Welfare Ministry also plans to hold talks with the United States on the details, such as how meat should be processed, before officially deciding to remove the import restrictions, officials said.

“I want the Japanese government to actively check whether the United States is conducting risk management properly to ensure safety,” Noboru Manabe, head of the research panel and professor at Osaka International University, said after the panel meeting.

Japan has been facing U.S. pressure, which has grown stronger under the administration of President Donald Trump, to eliminate the current age restriction, in place since 2013 amid concern over bovine spongiform encephalopathy, also known as mad cow disease.

The commission’s research panel had been studying the potential health effects of scrapping the restrictions since April at the request of the health ministry. The panel also looked into U.S. food safety management, such as the removal of cattle tissue that carries a high risk of contamination.

No specific problems had been pointed out during the discussions.

Japan banned all imports of U.S. beef in 2003 following the discovery of BSE among U.S cattle, but resumed imports in 2005 of U.S. beef from cattle aged no more than 20 months.

It banned imports for a half a year in 2006 after finding some risky beef parts but has gradually eased import restrictions on the grounds that the United States has been internationally recognized as having the lowest risk of the disease.

Should the restrictions be completely lifted, the effect on Japan’s livestock industry is seen as very limited. The U.S. beef industry usually processes the cattle at about 20 months old, meaning that U.S. beef imports rarely derive from the type of older cattle considered.

“Most U.S. beef imported to Japan is from young cattle so eliminating the restrictions will not have a large impact,” said one industry group official.

It is difficult to believe that imports to Japan will increase, and there is more concern about the government’s position during bilateral trade negotiations between the two countries, the official added.

Removal of the restrictions may help the United States cut costs that have been necessary to meet Japanese regulations.

U.S. beef has met stiffer competition from Australia whose economic partnership agreement with Japan lowered tariffs on beef and other products after it took effect in 2015. The tariff-lowering Comprehensive and Progressive Trans-Pacific Partnership free trade pact between 11 members including Japan and Australia will enter into force without the United States on Dec. 30.

Gene-edited food is coming, but will shoppers buy?