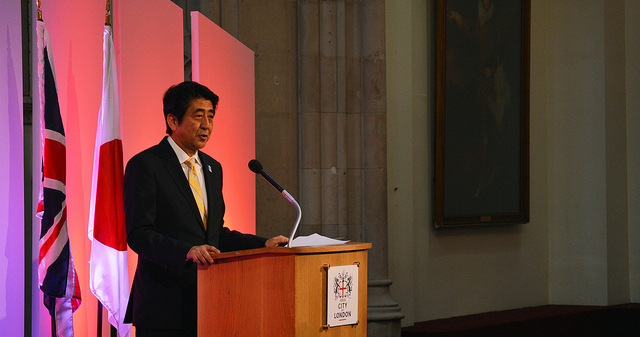 "Amid moves of protectionism, the fact that Japan and the European Union could demonstrate a strong political commitment to raise the banner of free trade is an outcome to be proud of and a robust message to the world," Prime Minister Shinzo Abe said at a joint press conference with Tusk and Juncker. (Chatham House, Flickr/Creative Commons)

TOKYO — Japan and the European Union sealed a broad agreement Thursday on a free trade deal that they call a sign of their efforts to promote an open economy.

After four years of talks, Prime Minister Shinzo Abe, European Council President Donald Tusk and European Commission President Jean-Claude Juncker reached the deal in Brussels for their markets with nearly 640 million people and accounting for nearly a third of the global economy.

“Amid moves of protectionism, the fact that Japan and the European Union could demonstrate a strong political commitment to raise the banner of free trade is an outcome to be proud of and a robust message to the world,” Abe said at a joint press conference with Tusk and Juncker.

Referring to the agreement, Tusk said, “Although some are saying that the time of isolationism and disintegration is coming again, we are demonstrating that this is not the case.”

Juncker said the deal “sets the standards for others, and it shows that closing ourselves off from the world is not good for business, nor for the global economy, nor for workers. As far as we are concerned, there is no protection in protectionism.”

The broad agreement on the eve of the Group of 20 summit in Hamburg, Germany, was achieved after the two sides resolved thorny issues at a meeting the previous day on tariffs on sensitive products such as Japanese automobiles and European wine and cheese.

Juncker said they will aim to reach a final agreement in the “next coming months” and put the pact into force in early 2019.

The two sides still need to work out a system to settle disputes between a company and the country it is investing in.

Both Japan and the European Union are concerned about Trump’s “America First” approach to trade, as seen in the country’s withdrawal from the Trans-Pacific Partnership free trade pact and recent suggestion of punitive tariffs on steel imports from Europe, Japan and other countries. Japan is a member of the TPP accord.

The European Union has also seen talks stalled on a free trade initiative with the United States, called Transatlantic Trade and Investment Partnership, after Trump came to power.

For Japan, the deal will be its biggest trade treaty unless the TPP including the United States takes effect. The new pact will represent a crucial part of Abe’s growth strategy to tap into growing overseas markets to offset a drop in domestic demand in the long term amid the country’s declining population.

The pact will also show skeptics in the European Union the benefits of staying in the bloc with access to inner and outer markets, in the wake of Britain’s decision to leave the bloc, analysts said.

The Japan-EU deal is expected to spur trade and investment by removing or lowering tariffs on a broad range of products, including farm and industrial products, while it is also to set common trade rules.

Over 90 percent of the products will see tariffs eliminated, around the same level as in the TPP.

Japanese automobile and electronics manufacturers are expected to regain competitiveness in the European market in competition with rivals from South Korea, which has already signed a free trade pact with the bloc, while European farmers are seeking to tap deeper into the Japanese market for wine, cheese and meat.

Local dairy producers have been wary about the influx of competitive European products and the Japanese government is expected to compile measures to mitigate the negative impact on them from the trade pact.

The negotiations for the Japan-EU pact were launched in 2013 but discord over whether and when to eliminate tariffs on Japanese automobiles and European agricultural products such as cheese and wine has slowed progress.

Japanese Foreign Minister Fumio Kishida and EU Trade Commissioner Cecilia Malmstrom said Wednesday following their meeting that their leaders will give the final endorsement of the broad free trade agreement on Thursday.

Among key areas in the agreement, Japan will set up a low-tariff quota on European cheese. The tariff for the quota, initially 20,000 tons, will be eliminated 15 years after the pact comes into effect, the Japanese Foreign Ministry said.

The two sides will also scrap their tariffs on wine as soon as the pact comes into force, while duties on European chocolates and pasta would be scrapped after 10 years, the ministry said.

The bloc will ease regulations on wine, such as those related to sugar content and bottle size, and will immediately eliminate tariffs on Japanese sake and green tea.

The two sides have agreed to phase out tariffs on Japanese automobiles after seven years and on Japanese TVs after five years.