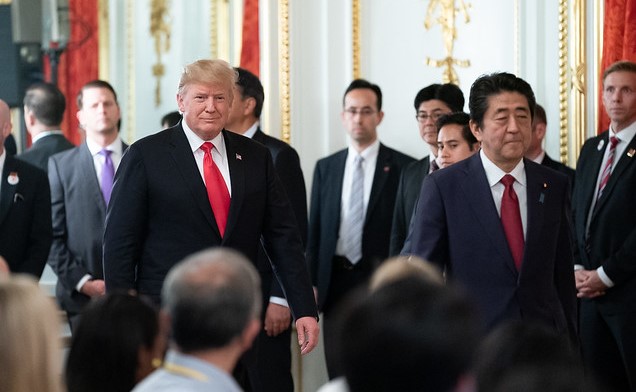 Trump is likely to press Japan to make concessions, particularly on increased access to its agricultural market to appease American farmers and ranchers amid the 2020 presidential race, according to analysts. (The White House, Public Domain)

TOKYO — Prime Minister Shinzo Abe has won a respite from U.S. pressure on trade for now, but analysts expect President Donald Trump to push Japan in a few months into making concessions on agriculture and automobiles as he looks for a major win to bolster his 2020 re-election bid.

In official and informal talks Sunday and Monday during Trump’s state visit to Japan, the U.S. leader indicated Washington would not press Tokyo for a bilateral trade deal until after a Japanese House of Councillors election slated for July, apparently taking into consideration Abe’s desire to avoid tariff-cutting pressure on farmers.

Trump, however, complained about the “tremendous” trade imbalance between the two countries and said there would be some announcements regarding bilateral trade “probably in August.”

Given that farmers have been a reliable source of votes for Abe’s Liberal Democratic Party, he would not want to upset them — especially amid speculation that he may dissolve the House of Representatives for a snap election to be held simultaneously with the upper house election.

In a meeting with Abe in Washington just a month ago, Trump said he wants to “get rid of” Japan’s “very massive” tariffs on American farm products in a deal he said he might strike with Abe by late May, although negotiations for a bilateral trade agreement started in April.

“Mr. Trump does Mr. Abe a favor this time,” said Takeshi Minami, chief economist at the Norinchukin Research Institute in Tokyo. “After the upper house election, the president may use the favor to extract concessions from the prime minister in a deal that would be more favorable to the United States.”

Abe and Trump are expected to meet on the sidelines of a Group of Seven summit in late August in France and the U.N. General Assembly in September in New York.

Trump is likely to press Japan to make concessions, particularly on increased access to its agricultural market to appease American farmers and ranchers amid the 2020 presidential race, according to analysts. Just like Abe, Trump needs votes from U.S. farming states for re-election.

“Great progress being made in our Trade Negotiations with Japan. Agriculture and beef heavily in play,” Trump tweeted Sunday. “Much will wait until after their July elections where I anticipate big numbers!”

U.S. farmers and ranchers are pushing the administration to level the playing field because they have started losing market share in Japan following the recent enactment of a revised Trans-Pacific Partnership, the 11-nation regional free trade agreement, and an FTA between Japan and the European Union.

Trump withdrew the United States from the TPP — which includes Japan and farming nations such as Australia and Canada — in 2017, citing his preference for bilateral trade deals.

For its part, Japan has been calling for the elimination of U.S. tariffs on Japanese vehicles, including a 2.5 percent levy on cars and a 25 percent duty on trucks as agreed to by former President Barack Obama’s administration in the TPP. Tokyo levies no taxes on imported vehicles.

But the Trump administration has expressed reluctance to remove those auto-related tariffs. The president regards automobiles as emblematic of the trade imbalance with Japan as automobiles and car parts accounted for about 75 percent of the U.S. trade deficit as of 2017.

In a threat to Tokyo and other major auto exporters, Trump on May 17 delayed his decision on a potential 25 percent tariff on imported cars and vehicle parts for up to six months, and directed U.S. Trade Representative Robert Lighthizer to negotiate deals with Japan and others to address what his administration perceives as a threat to U.S. national security.

“I think they both understand that agriculture and automobiles are somehow going to be a part of any deal, but exactly how and when agriculture and autos is going to be addressed is still very much up for debate,” said Matthew Goodman, senior adviser for Asian economics at the Center for Strategic and International Studies, a Washington think tank.

Referring to the 180-day window for negotiations, Goodman said Trump is likely to use what the administration calls “the threatened impairment of national security” as an excuse to demand voluntary export restraints or quotas from Japan and other major auto exporters — a practice that is restricted by the World Trade Organization.

Experts say the speed of Japan-U.S. talks will depend on whether the Trump administration demands one-sided concessions from Japan, or is willing to live with more realistic compromises.

“If the U.S. insists on agricultural concessions beyond the TPP levels or on quotas restraining Japanese auto exports to the U.S., I think we are in for protracted negotiations,” said Mireya Solis, director of the Center for East Asia Policy Studies at the Brookings Institution, a Washington think tank.

“The fastest scenario would ensue if the U.S. and Japan agree to reinstate the market access schedules they had agreed under the TPP,” Solis said. “Chances of that are slim, however, because of President Trump’s obsession with the trade deficit and his predilection for tariffs.”

Underscoring Solis’ concern, Trump blasted the TPP, telling reporters Monday that the multilateral pact “would’ve destroyed our automobile industry and many of our manufacturers.”