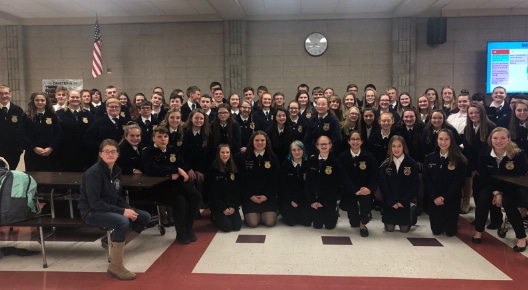 ITHACA, N.Y. — New York FFA kicked off the New Year in a big way! January held opportunities for FFA members to broaden their leadership skills, engage with agricultural leaders, and meet FFA members from around the state.

New York FFA took over the City of Syracuse OnCenter January 24th-26th for the annual 212/360 Leadership Conference. This conference focuses on developing student’s leadership skills and then applying those attributes to helping their chapters and communities. Students from grades 6-12 attended and had a blast! While students developed their leadership potential during the day, nighttime activities brought a different liveliness to the OnCenter. Friday night, students attended a Syracuse Crunch hockey game. The fun night held on Saturday evening was a huge hit; the theme “FFA Throughout the Decades” brought in FFA members wearing their favorite apparel from current times back to earlier generations. At the end of the fun night, the district with most attendees in costume was declared the winner and received a prize. This year, District 3 was chosen as the winner and received phone wallets with this year’s State FFA Convention theme printed on them.

Looking forward to February, the calendar is filled with conferences, competitions, and special guests! In just over a week we look forward to hosting over 100 FFA members and advisors for the State Leaders Experience in Albany, NY. Students will have the opportunity to engage with our state leaders and learn how our state government operates. Hundreds of students across the state will begin competing in 14 different leadership development events during our district competitions. We are excited to see how everyone does. Good luck to all of our competitors!

District 4 has been having had an exciting few months. In October, FFA chapters attended the National FFA Convention. There they toured Ozark Fisheries and attended workshops and sessions.  This year we were honored to have the 2019 Ag Society Chapter of the Year Recipient Delaware Academy. Delaware Academy hosts multiple pancakes breakfast throughout the year for the public. They also volunteered at their local food pantry and made food baskets for Thanksgiving. In March, Delaware Academy will have an open house for their Maple weekend highlighting their Sugar House. Several FFA chapters attended the 212/360 Conference in January.

Oxford will begin building blessing boxes for their community from a grant they just received. This will be similar to ‘on the go’ food pantries.  On Tuesday, they have an afterschool ag program open to anyone in 5th through 8th grade. They also just received a grant allowing them to produce maple syrup for the first time ever. At the State Leaders Experience in Albany, NY Oxford had a booth in the well of the state legislative office building education fodder. Other chapters including Delaware Academy, Otselic Valley, and Afton attended meetings to speak with legislators about agriculture and Ag in the Classroom through their stories. In May, Walton FFA will be holding their annual Ag Day at the elementary school. They are striving to help grow their Ag Club in elementary and middle school. The Sherburne Earlville FFA chapter has been working on their pole sugar house throughout the year. They purchased a new 2’ x 6’ evaporator for their up and coming maple program and are growing vegetables in their student-built greenhouse to finish out the fall growing season. Sherburne Earlville also hosted the District 4 Leadership Development competitions. All of our chapters attended Districts on February 11th and did an amazing job. We wish everyone luck as they move on to Sub-State Competitions and then on to States Convention in May. Everyone has begun preparing for Empire Degrees and Proficiency Award applications as they look to be recognized at state convention for all of their hard work.

Timothy James, a senior at Afton Central School, has shined as an outstanding FFA member and has been chosen as the District IV member spotlight. Timmy lives on Minerdale Farm which is home to his Supervised Agriculture Experience and 4-H projects. To him, his SAE “has given him many different opportunities in production agriculture.” Timmy’s SAE is in Diversified Livestock Production which began in 7th grade. He shows at many shows for meat goats, beef cows, poultry and swine. He has shown at the Empire State Showdown, Broome and Delaware County Fair, the Junior Livestock Show, the Coby Classic and the New York State Fair. His meat goats are prepared for show season to be sold at the 4-H auctions as well as for ethnic holidays. His goats, as well as swine, have received top awards in many of the shows including Grand Champion Market Goat at the Empire State Showdown. His hard work and dedication with his livestock have landed him a gold proficiency in goats and swine! This year, Timmy received gold for his poultry proficiency and was a State Star recipient! We wish Timmy good luck with his SAE and thank him for his dedication to agriculture. He sets a great example for others in our district as well as across the state!

Supporting the future of the Washington Co. Fair