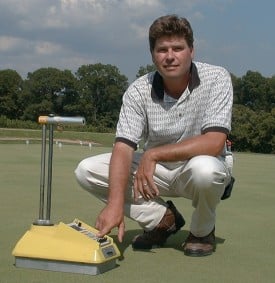 NEW BRUNSWICK, N.J. — On Feb. 23, the Rutgers University Board of Governors appointed extension specialist James A. Murphy, who is widely recognized as one of the nation’s top scientists in turfgrass management, to the Ralph Geiger Chair in Turfgrass Science. His term began July 1, 2020.

Murphy is renowned for developing environmentally sound management practices, recently leading a national task force to identify knowledge gaps in how nutrients are transported to streams and groundwater, and coordinating the National Nutrient Management Summit, which drew experts from throughout the United States. He also served as technical adviser to state legislators in New Jersey for the passage of the first and most comprehensive fertilizer law governing nitrogen and phosphorus use on turf in the country.

An authority on turfgrass tolerance to traffic stress, cultural management of stress-induced diseases and nutrient management of cool-season grasses, Murphy was named director of the Rutgers Center for Turfgrass Science, effective January 1, 2021. He was elected a fellow of the Crop Science Society of America in 2014 and the American Society of Agronomy in 2015, and he was awarded the prestigious Fred V. Grau Turfgrass Science Award in recognition of his significant career.

The late Ralph Geiger, a strong supporter of Rutgers’ turfgrass program, generously provided funds to create an endowed chair in turfgrass science at the School of Environmental and Biological Sciences in 2005. The first occupant of the Ralph Geiger Chair in Turfgrass Science through 2011 was Bruce Clarke, extension specialist in turfgrass pathology in the Department of Plant Biology. Bingru Huang, Distinguished Professor in the Department of Plant Biology, was the next occupant of the chair from 2011-2019.

Murphy joined the Rutgers faculty in 1991 as an assistant extension specialist until his promotion in 2006 to extension specialist in the Department of Plant Biology. He was recommended for the chair by Laura J. Lawson, interim executive dean of the School of Environmental and Biological Sciences and interim executive director of the New Jersey Agricultural Experiment Station; Christopher J. Molloy, chancellor of Rutgers University–New Brunswick; Prabhas V. Moghe, executive vice president for Academic Affairs; and president Jonathan Holloway.