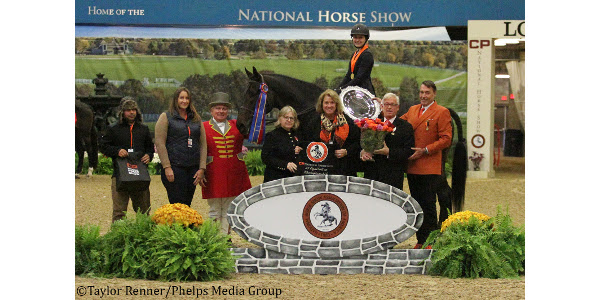 LEXINGTON, Ky. — The 2017 CP National Horse Show kicked off on Sunday with an exciting brand new event: the National Horse Show 3’3″ Equitation Championship. Jaden Porter became the first name to be inscribed on the commemorative trophy, which will be proudly displayed at the Kentucky Horse Park Museum.

The inaugural National Horse Show 3’3″ Equitation Championship did not require riders to be prequalified in order to participate and was open to junior members of US Equestrian or Equestrian Canada who have never competed in any of the following national equitation finals with fences at 3’6″ in height: ASPCA Maclay National Championship, Dover Saddlery/USEF Hunter Seat Medal Final, Platinum Performance/USEF Show Jumping Talent Search Finals (East or West), WIHS Equitation Final, Jump Canada Medal Final or the North American Junior Equitation Championship.

Sunday’s National Horse Show 3’3″ Equitation Championship included a preliminary over fences round, which saw 47 horses and riders come forward to contest the course designed by Bobby Murphy. Judges Robin Rost and Walter T. Kees invited the top 20 riders to return to the Alltech Arena for a flat phase and a final over fences round. After all three rounds were complete, the judges opted to test the top four riders: Jada Fuleky, Molly Canfield, Caroline Blake and Porter.

The test consisted of six obstacles and challenged riders with a trot fence as well as asking for a halt after cantering over the first two oxers.

Porter, 14 years old from St. Louis, Missouri, and Wellington, Florida, was first in the order-of-go in Sunday’s first over fences round. With the help of trainer Stephanie Peterson of Dragonfly Farms, she and Dragonfly’s Corleone B remained consistent throughout all four rounds to come out on top as the first-ever winner of the National Horse Show 3’3″ Equitation Championship.

Finishing in reserve was Blake, trained by Cynthia Williams of New England Farm, aboard Larry, while Canfield, trained by Lorrie Canady of Galway Farm, and Caprioso 2 rounded out the top three.

For information regarding the National Horse Show 3’3″ Equitation Championship competition and its rules and regulations, click here.

The 2017 National Horse Show will pick up once more on Tuesday, Oct. 31, at 8 a.m. in the Alltech Arena at the Kentucky Horse Park with the professional hunter divisions. 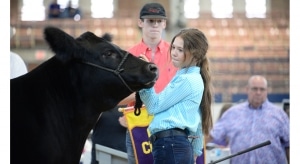