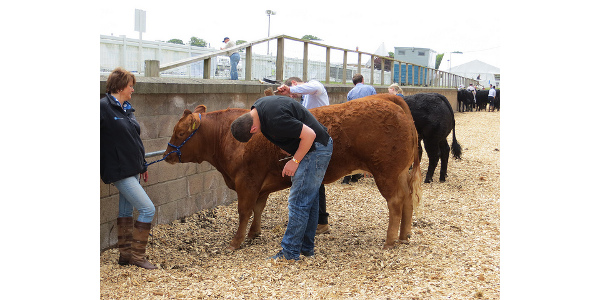 NORMAL, Ill. — Next year will mark the third year of Illinois State University’s Hoof N’ Horn Jackpot show, The Redbird Rumble. This past spring, they made history by hosting the largest jackpot cattle show in Illinois!

In 2015, the members and advisors, Ms. Cori Malone and Dr. Maria Boerngen, decided to host a jackpot cattle show.  The motivated student organization worked hard, and it paid off. Illinois State University offers an RSO Program Fund, and the Hoof N’ Horn club was fortunate enough to receive it.  They were able to utilize this fund for judges and the facility.  With this cost covered, the club was looking for more support with the additional fees. Little did they know the poor out of support that would come.

After the mention of a jackpot cattle show, Illinois State University Agriculture Alumni jumped on the opportunity to help.  The Ag. Alumni donated the funds, and the show was a go.  A jackpot cattle show costs roughly $7500 to put on, and the Ag. Alumni made sure the money was there. When the show arrived, they were pleased to have 150 entries. Because of these cattle entries, the 2016 Hoof N’ Horn Jackpot Cattle Show was a success!  After the conclusion of the show, the members were excited to continue the event and start the works for a second annual show.

For the second year, the Agriculture Alumni donations were even greater.  They went on to receive over $10,000 in Ag. Alumni donations, along with other community donations.  Also for the second year in a row, the club received the RSO Program Fund!  With these monetary goals, they were able to partner with the University of Illinois to host the largest jackpot cattle show in Illinois in 2017.  The 2017 Redbird Rumble jackpot show hosted over 260 head of cattle!

Apply to the agriculture scholarships