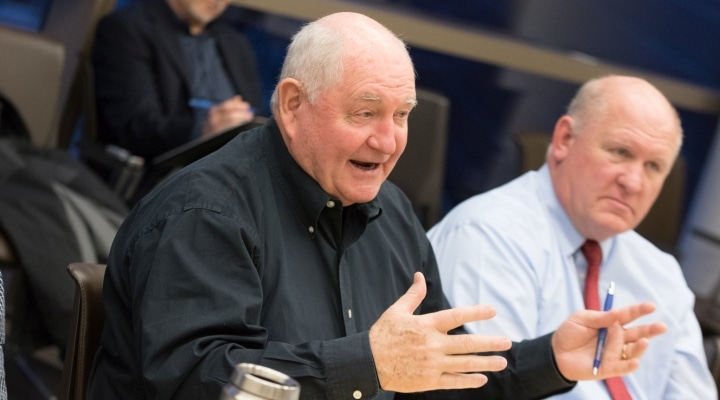 LAUREL, Md. (AP) — Billions of dollars worth of fruit, vegetables and other farm products that might have gone to waste because of the coronavirus pandemic will instead be delivered to food banks and nonprofit organizations that help the needy under a new Agriculture Department program.

At a brief ceremony marking the program’s launch at Coastal Sunbelt Produce in Laurel, Perdue gave credit to President Donald Trump. Trump had seen news reports about farm goods going to waste and said ‘Sonny, I want you to bring me a program that will work,’”Perdue said.

Perdue announced last month that his department will spend up to $3 billion in coronavirus relief money to buy and distribute agricultural goods through regional and local distributors.

“When this thing happened, obviously, it was horrifying to hear about vegetables having to be plowed under because of no markets and milk having to be dumped, animals potentially having to be euthanized because we had broken the supply chain,” Perdue said.

Food distributors saw sharp declines in business after restaurants and other food service establishments shut down or cut back because of the pandemic.

Suppliers, like Coastal Sunbelt Produce, is packaging the fruits and vegetables in family-sized cardboard boxes and expects to deliver 35,000 boxes a week to food banks, community and religious organizations, and other nonprofits through June 30.

Perdue, Ivanka Trump and Maryland Gov. Larry Hogan, who wore face coverings inside the refrigerated warehouse, watched as workers swiftly packed boxes with mushrooms, tomatoes, zucchini, bell peppers, potatoes and other produce items. The workers were bundled up against the chill and wore face shields, face masks and other protective gear.

“We held them,” Ivanka Trump said. “These are 20 to 25 pound boxes of the finest fresh produce, often locally grown.”

The president’s eldest daughter has been working with USDA, the Small Business Administration and Treasury Department to include smaller farms in coronavirus relief programs, the White House said.

After Coastal Sunbelt Produce received a USDA contract, the company was able to recall 50 furloughed employees to work on the food box program, she said.

Trump praised the program at an unrelated White House event on Friday.