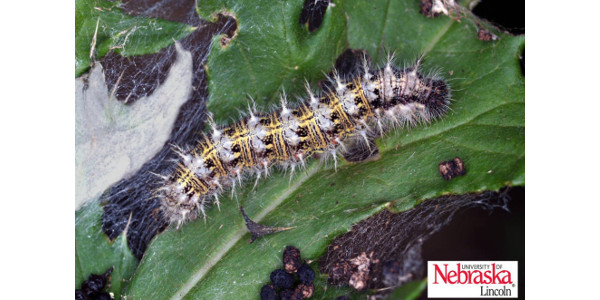 We heard some reports that people were treating fields based on the number of butterflies present. This is not recommended for several reasons; butterflies are not the damaging stage, and butterflies may move between several fields as they lay their eggs. Also, there can substantial mortality of eggs and caterpillars, both from insect predators and disease. Many insect pathogens (fungi, bacteria, and viruses) may cause lethal disease in insects. They are commonly found in the soil and given the right environmental conditions, can cause widespread disease in insects. After the recent rainfall and cooler temperatures in many parts of Nebraska, many people reported dead or dying thistle caterpillars.

Last week (week of July 22), I received several calls that serve as reminders of why it is so important to frequently scout fields. Three calls in particular illustrated this point.

Early in the week I visited a soybean field in Stanton County where I had research plots, and it was full of painted lady caterpillars, and defoliation was heavy. Interestingly, the caterpillars were not all the same size, but ranged from about 0.5 to 1.25 inches long. All were healthy, actively feeding, and the smaller ones would be feeding for a week or more. I talked with the farmer, and since large areas of the field were very likely to surpass 20% defoliation, he decided to treat with an insecticide application. I believe he made the correct decision.

Later that week I talked on the phone with a farmer from, I believe, Thurston County who also observed a large population of painted lady caterpillars in one of his soybean fields. He thought defoliation might reach 20%, but there was a significant difference between his field and the farmer from Stanton County. The caterpillars in his field were all large, up to about 1.5 inch long. These caterpillars were about done feeding and would soon pupate, so the defoliation level would not increase significantly. This farmer decided not to treat, as treatment would be of little to no benefit. I believe this farmer too made the correct decision.

On Tuesday a crop consultant we collaborate with called and reported a field in Dixon County with high numbers of painted lady caterpillars, many of which were sick (Figures 2-4). The field was close to the UNL Haskell Ag Lab, so I went to the field and observed many caterpillars that appeared to have a bacterial infection. The consultant correctly believed that the disease would sweep through the field, and canceled a planned insecticide treatment. In a couple days most of the caterpillars would be sick, stop feeding, and die. Again, I believe he made the correct decision.

In each of these fields the farmer or consultant was able to make the most economical decision because he scouted his fields. Scouting, and frequent scouting (e.g. at least once a week), is the foundation of integrated pest management (IPM) and allows the grower, farm manager, or consultant to make the best decision they can based on the most current field conditions. It is also important to be aware of what is going on in other regions of Nebraska, as this can give you a heads-up on what to expect. Check CropWatch weekly during the growing season for field reports and current crop management information.

Implications of rains on calf crop