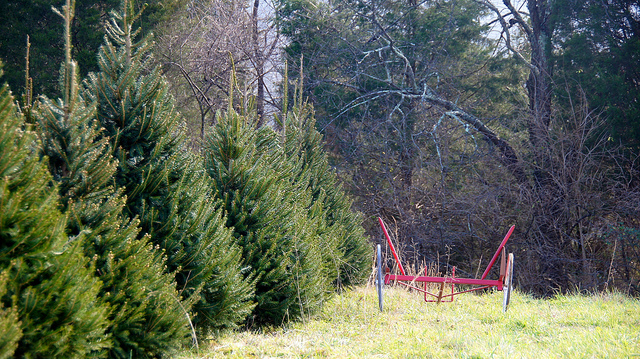 Larger retailers are doing just fine, officials say. It's the smaller charitable organizations, school groups, and mom-and-pop operators that have had to scramble for trees. (Ted Eytan, Flickr/Creative Commons)

MONTPELIER (AP) — People may need to trim back their Christmas tree expectations this year.

The yuletide market imbalance was created a decade ago when a glut of Christmas trees and the Great Recession combined to drive many growers out of business. Now the supply is tight and it takes eight to 10 years — the time needed to grow a Christmas tree — to boost the supply.

“It’s bad. It’s the worst I’ve seen in a long time,” said Matthew LaCasce, co-owner of the Finestkind Christmas tree farm in Dover-Foxcroft, Maine. The farm sells about 10,000 trees each season and is turning down orders every day from desperate retailers, LaCasce said.

Larger retailers are doing just fine, officials say. It’s the smaller charitable organizations, school groups, and mom-and-pop operators that have had to scramble for trees.

“It’s going to be tough for everybody. There’s nothing you can do about it,” said Tajiri, who is fielding several dozen calls a day in Honolulu. “It’s first come, first served.”

Lovell’s Florist and Nursery in Medford, Massachusetts, resorted to a hodgepodge of suppliers from Canada, North Carolina and the West Coast because the regular wholesaler couldn’t deliver, owner LaVerne Lovell said. They were expecting their final 1,000 trees to be delivered Friday.

“It was about two days of complete panic,” she recalled. “The Christmas season carries us through the winter. If we don’t have any trees, it would’ve been a real nightmare.”

The American Legion in Dover, Massachusetts, also had to search high and low for 450 trees for its annual fundraiser. “It’s getting tough,” said Tom McGill, who oversees the effort.

Supply and demand problems are nothing new. Like other crops, Christmas trees are a commodity that goes through cycles from too few trees to an oversupply.

But regional factors are also exacerbating the problem.

For example, a spring frost damaged trees at some farms in Canada’s Nova Scotia, choking off some supply in the Northeast. Some Canadian farms in New Brunswick are buried under snow from recent storms, making it difficult for them to get trees onto trucks for shipment.

A shortage of Fraser trees, the most popular on the East Coast, had some North Carolina buyers scrambling to find balsam firs in New England. In Oregon, some people are taking Fraser fir trees from the East instead of noble firs that are the most popular tree on the West Coast.

“Supply and demand seem to always be in some flux,” Chal Landgren, a Christmas tree specialist and professor at Oregon State University, said via email.

All told, U.S. consumers are expected to buy about 27 million trees, roughly the same as the last two years, according to the National Christmas Tree Association.

Most people will find what they want, but prices could be a bit higher than last year’s average retail price of about $75, said Tim O’Connor, the association’s director.

With the lean supply, shoppers might want to start early if they want a lot of choice and variety.

Spencer Putman, of Weybridge, Vermont, didn’t worry himself about a purchase. He simply paid $5 for a permit to chop down his own tree in the 400,000-acre Green Mountain National Forest. “I don’t think we are going to run out of them very soon,” he said.

Rural students put off by college

Show your love for NY farmers this Valentine's Day
February 4, 2020