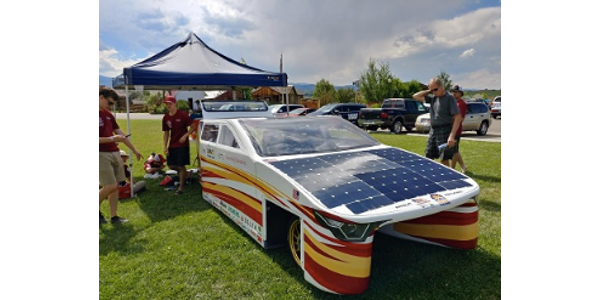 BOONE, Iowa — Team PrISUm wraps up a busy summer schedule at the Farm Progress Show Aug. 28-30, near Boone, where their solar vehicle, Penumbra, will be on display at the Iowa State University exhibit.

This summer they have conducted outreach across Iowa, through Nebraska and along the Oregon Trail to Bend, Oregon. Their annual Sun Run in June took them on a road trip around Iowa, visiting sponsors and youth events.

“During the Sun Run, we talk to elementary students and engineers about solar power and what we do on the team,” said Sean Collins, a member of Team PrISUm. “We teach anyone that is willing to listen about the science behind our design and what thought process we used while designing the car. They get to observe the car, interact with it and really learn how a solar car works.”

“We spent 24 hours a day for seven days rebuilding systems and growing as a team,” said Smeet Mistry, co project director in a July 13 Facebook post. “We learned and fully implemented a battery protection system over the span of 96 hours. We were forced to evaluate and validate almost the entire mechanical structure of the car and proved that we had put the time into engineering it instead of slapping it together, and we were forced to adapt to rapidly solve problems as they came up essentially on an hourly basis.”

But at the end of the day, ASC officials ruled that Team PrISUm would not be able to participate in the American Solar Challenge as a multi-occupant vehicle or as a demonstration vehicle. The team, as much as it hurt, agreed. Penumbra was not in a state that they could ensure the safety and reliability of the drivers and passengers on the open road.

The team carried on – in true Iowa State spirit and with a mission to perform more outreach with Penumbra, demonstrating the innovation the team had built into Penumbra.

“We received a massive amount of support during the grand prix from almost every team present and it was our turn to support them in the American Solar Challenge,” said Agostino LoBello, co project director, in the July 13 post.

LoBello and Mistry lead a team that wants to build a practical solar car that changes the paradigm of transportation. They strive to inspire future generations to pursue their passions through education. They are bringing that attitude to Farm Progress Show. Meet them and other team members while exploring Penumbra on the south lawn at the Iowa State exhibit during Farm Progress Show, Aug. 28-30.