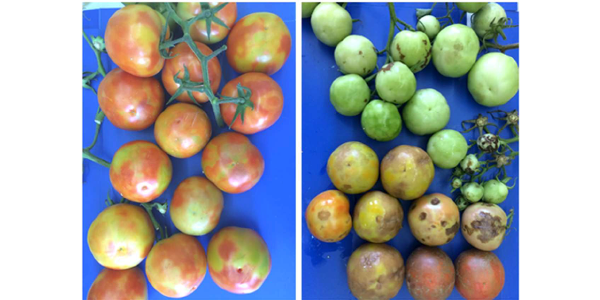 AMES, Iowa — If you love tomatoes, you may want to plant your own or buy local this spring or potentially face paying higher prices at the grocery store. Iowa State University Seed Science Center (ISU-SSC) is working with SENASICA, the department of Agriculture in Mexico, to help identify and stop the spread of Tomato Brown Rugose Fruit Virus (ToBRFV).

“This particular virus overcomes all know resistance genes in tomato and is easily transmittable,” said Dr. Tracy Bruns, ISU-SSC seed pathologist. “In that respect it is harder to manage.”

Tomatoes are the second most consumed fresh market vegetable in the United States, topped only by potatoes. This is according to the United States of Department of Agriculture (USDA) which also reports over 45 percent of tomatoes consumed in the U.S. are imported, with 90 percent of those imports coming from Mexico.

ToBRFV is a Tobamovirus discovered in Israel in 2014 and in Jordan a year later. It has since shown up in multiple countries, some of which have implemented restrictions on tomato seed imports. While the disease is seedborne, it is so easy to spread, workers walking through the fields can transmit it between plants by simply brushing against them. The disease causes yellow and brown wrinkled, necrotic spots on the fruit, making them unmarketable. SENASICA sought help from Bruns because she previously worked with the Mexico government to control a disease from the same family, on pepper seeds.

“We are currently working to validate that our Tobamovirus testing methods pick up this new virus,” said Bruns. “If we can figure out how to best test seeds, it will help insure that healthy seeds are being planted and hopefully limit the spread of this disease.”

The Seed Lab at ISU is the largest public seed testing facility in the world, testing over 35,000 samples annually on 300 seed species, for 350 different pathogens. If there is an answer to be found, Bruns and the team at ISU will find it.

But implementing effective testing is only part of the battle, educating Mexico’s farmers on the importance of rotating crops and other management tools is the other critical issue. That is why Bruns has partnered with a scientist from University of California–Davis who is working on management and grower education. Their work is funded by a grant from the American Seed Trade Association and the seed industry.

Bruns says it comes down to simple economics. Mexico’s growers don’t have the resources to do what we would do in the United States.

“Creative management tools need to be found,” Bruns said. “We are working together on many different fronts to stop the spread and impact of this virus.”

One major, four sets of twins