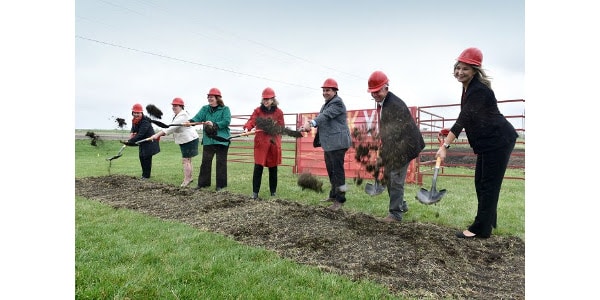 Ground was broken for Iowa State University's new Turkey Teaching and Research Facility during a ceremony April 8. (Courtesy of ISU College of Agriculture and Life Sciences)

A groundbreaking was held on April 8 for the facility, which will be constructed north of the Robert T. Hamilton Poultry Teaching and Research Farm, located south of the Iowa State campus on 520th Avenue.

“This tremendous new turkey research, teaching and extension facility, with support from industry partners and private donors, will ensure we are providing the best hands-on education for students and the infrastructure to drive new scientific discoveries across the turkey industry,” said Dr. Dan Thomson, chair of the Iowa State University animal science department. “Adding this to our recently opened Hamilton Poultry Teaching and Research Farm will complete our cutting-edge facilities to write the next great chapter of Iowa State poultry science history.”

The Turkey Teaching and Research Facility will provide a living classroom for students to experience hands-on learning in modern production practices, and flexible space and state-of-the-art equipment for research that addresses current challenges facing the turkey industry. It will also offer benefits beyond Iowa State, from outreach, continuing education and peer-to-peer opportunities for professionals in the industry, to observation areas where visitors, including schoolchildren, can see first-hand examples of turkey production systems and learn about turkey production. When complete, the facility will be the only one of its kind focused on turkey production at a major university.

A lead gift was provided by Jim and Julie Balloun of Atlanta, Ga. Jim received his bachelor’s degree in industrial engineering from Iowa State and is the retired chairman and chief executive officer of Acuity Brands, Inc., a lighting and building management firm headquartered in Atlanta, Ga. His father, Stanley L. Balloun, served as professor in animal science at Iowa State and was an international expert and leader in the science of turkey feed.

West Liberty Foods was formed in 1996 by 47 Iowa turkey growers. The company and its grower/owners are committed to animal health and welfare and delivering superior-quality turkeys.

The Iowa Turkey Federation, which represents more than 130 turkey farmers in Iowa, was formed in 1948 to advocate for the enhancement of the turkey industry and its members.

“Iowa’s turkey farmers have a continuous desire to learn new information on how to better care for their turkeys and the environment,” said Gretta Irwin, executive director, Iowa Turkey Federation. “We are delighted to partner with Iowa State on an exceptional new facility that will serve its excellent faculty and students, and help provide industry and farmers with the resources and information they need to move in the right direction with their operations.”

Iowa’s turkey industry is one of the largest in the United States, ranking seventh in turkey production and raising approximately 12 million turkeys annually. The industry supports over 38,000 total jobs and is responsible for more than $10 billion annually in economic activity throughout Iowa. Iowa State University plays a critical role in preparing professionals for Iowa’s poultry industries. Poultry science has been part of the university’s curriculum for over a century, and the university has one of the world’s strongest research programs in poultry genetics, breeding, nutrition and management.

The donors made their gift commitments through the Iowa State University Foundation. The foundation is a private, nonprofit organization committed to securing and managing gifts that benefit Iowa State University. The Forever True, For Iowa State campaign, with a historic goal to raise $1.5 billion, will help support Iowa State in becoming the premier land-grant university for the 21st century and beyond.

Researchers investigate the impact of anthelmintic resistance in parasites of poultry
July 13, 2021

Vaccination against Salmonella Reading in turkeys being evaluated
April 28, 2021