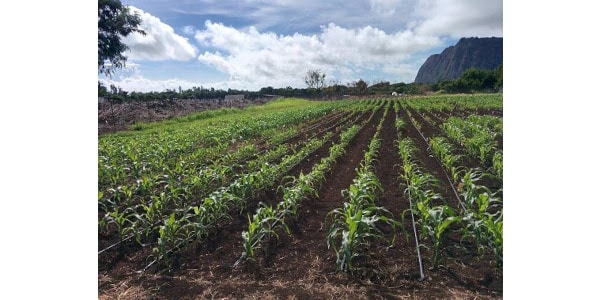 To help meet this need, the National Science Foundation’s Established Program to Stimulate Competitive Research (EPSCoR) has awarded a $3.99 million award to researchers at the University of Hawai’i at Mānoa and Iowa State University to develop an efficient, robust genome engineering toolkit that will introduce greater genetic diversity to tropical maize and its temperate cousin, corn.

The project, Genome Engineering to Sustain Crop Improvement (GETSCI), is led by Michael Muszynski, assistant professor in the Department of Tropical Plant and Soil Sciences, and a team of colleagues at the University of Hawai’i at Mānoa. They are partnering with Iowa State University Department of Agronomy faculty Kan Wang, professor and holder of the Global Professorship in Biotechnology, and Jianming Yu, professor and Pioneer Distinguished Chair in Maize Breeding. Iowa State will receive about $1.2 million for its part of the project.

Maize contributes $61 billion to the U.S. economy and is the biggest commodity crop grown in both Iowa, the center of the corn breeding industry, and Hawaii. While genetic diversity is the lifeblood of crop improvement, reproductive barriers often pose major bottlenecks to accessing this diversity.

“Tropical maize germplasm has a lot of beneficial traits that breeders would like to be able to use to improve performance,” Yu said. “However, it is very hard to grow and work with in the Corn Belt, primarily due to its flowering behavior.”

Tropical maize is sensitive to day length, or photoperiod. Daytime in the extended growing season of the tropics lasts about 12 hours, whereas summer days in temperate regions like Iowa last about 16 hours.

One aim of the new project is to develop improved genome editing tools to reprogram the flowering behavior of high-yielding tropical maize lines so they can be incorporated into other maize breeding programs.

The goals of the four-year National Science Foundation-funded project also include increasing human and workforce capacity by training underrepresented students, particularly Native Hawaiians and Pacific Islanders, in genome engineering and plant transformation. During the four years of the project, the partner institutions plan virtual and in-person exchanges of undergraduates.

“Both Hawaii and Iowa will gain valuable new capabilities in genetic engineering, which will transform the types of crop research possible at both institutions,” said Wang, Co-Director of the Iowa State Crop Bioengineering Center. “Expected impacts from this project will help address food and economic security in Hawaii by supporting new tropical crop breeding industries. In Iowa, access to gene-edited, temperate-adapted tropical germplasm will move breeding of improved corn varieties into the next era, engaging students at our respective universities and setting the stage for important collaborations in the future.”

A unique component of the project is a focus on building the skills of students and scientists to communicate about relevant areas of science through training sessions, workshops and community engagement.

“This exciting collaboration leverages Hawaii’s strengths in tropical plant biology and transformation with Iowa’s expertise in maize transformation, genome engineering and crop breeding,” Muszynski said. “This type of work is not possible within a single institution, so I am grateful and pleased NSF is investing in building research capacity at both of our institutions, especially to help optimize novel methods to reprogram a complex trait like photoperiod-dependent flowering.”

Muszynski was previously an adjunct and assistant professor at Iowa State studying maize developmental biology. He developed the initial idea for the GETSCI project with long-time friend and colleague Nick Lauter, a research geneticist for the USDA Agricultural Research Service and affiliate faculty in Iowa State’s Department of Plant Pathology and Microbiology. Lauter was the USDA ARS lead for the project when he died in January 2021, just prior to the submission deadline for the proposal. Although devastated by this unexpected event, the team pressed forward, recruited professor Yu to cover Lauter’s area of expertise and was able to submit the winning proposal.

“We are grateful to Nick’s collaborative spirit and his many contributions to maize genetic research that helped lead to this award,” Muszynski said.

The GETSCI project is one of a set of nine NSF EPSCoR projects representing nearly $40 million to support innovative collaborations designed to build research and development capacity in states that demonstrate a commitment to research but have not received the levels of investment seen in other parts of the country.