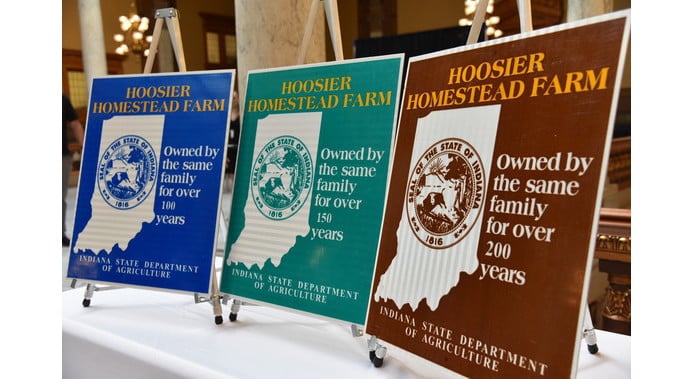 The Indiana State Department of Agriculture has announced that its Hoosier Homestead Program is partnering with publisher Acclaim Press to produce a coffee table book that honors agriculture in the state, with special focus on Hoosier Homestead families. (ISDA Photo)

MORLEY, Mo. — From a purely financial perspective, agriculture is a huge contributor to Indiana’s economy, generating over $30 billion annually and making it the tenth largest farm economy in the United States.

From a geographical standpoint, farmland and forest make up over 80 percent of the state’s total acreage — also huge.

But if you want the real scoop on how big farming is in the Hoosier State, ask one of the families who own the 56,000 farms totaling over 15 million acres to talk about their farm. You might want to pull up a chair, because they’ll likely be talking for a while.

Indiana farm families who own farms that have been in the same family for 100 years or longer now have an opportunity to tell their proud story in print. The Indiana State Department of Agriculture has announced that its Hoosier Homestead Program is partnering with publisher Acclaim Press to produce a coffee table book that honors agriculture in the state, with special focus on Hoosier Homestead families.

Hoosier Homestead—Honoring Farm Legacy will be an 8½ x 11-inch archive quality book that will not only contain an intensive history of Indiana farming, but also shine a spotlight on the 5,800-plus farms that have been honored by the ISDA’s Hoosier Homestead Award Program.

“Indiana has a rich history in agriculture,” said Lt. Governor Suzanne Crouch, Indiana’s Secretary of Agriculture and Rural Development. “The prospect of this book is very exciting and will further preserve our state’s heritage and the Hoosier farm family’s longstanding commitment to Indiana, agriculture and community.”

Eligible farmers can submit a history of their farm, up to 300 words, and a photo to be published in the book. There is no charge for publication, and submitters are not required to purchase a book.

An informational brochure detailing submission requirements, procedures and deadlines will be delivered to the homes of hundreds of farms and to county Extension offices later this week. Eligible families who haven’t received a brochure by June 20 should contact their Extension office for a copy, or visit the publisher’s website, www.acclaimpress.com, to access a PDF version.

Created in 1976, the Hoosier Homestead Award Program recognizes families with farms that have been owned by the same family for 100 years or longer and the contributions those farms have made to the economy, culture and society of Indiana. Eligible families can apply for the Centennial Award (100 years), Sesquicentennial Award (150 years) or the Bicentennial Award (200 years). Ceremonies honoring new award recipients are held twice a year—at the Indiana Statehouse in March and the State Fair in August.

“Since the program’s inception in 1976, we have awarded nearly 6,000 farming families with a Hoosier Homestead award and continue to see a substantial growth in interest year after year,” said Indiana State Department of Agriculture Director Bruce Kettler. “We encourage all interested families to share their farm’s story in this tribute.”

More information about the Hoosier Homestead Program, including a program application, can be found by visiting in.gov and typing “Hoosier Homestead” in the search tool.

Hoosier Homestead—Honoring Farm Legacy will be the eighth state agriculture history book produced by Acclaim Press, a Missouri publisher. All the featured states have been in the Midwest—Illinois, Kansas, Missouri, Nebraska, Oklahoma and Ohio.

“The state agricultural history and historic farm books have been some of the most popular and successful books we’ve produced,” said Acclaim Press editor Charlie Francis. “We’re confident that the farm families in Indiana will be as passionate about their farm histories as those we’ve seen in other states.”