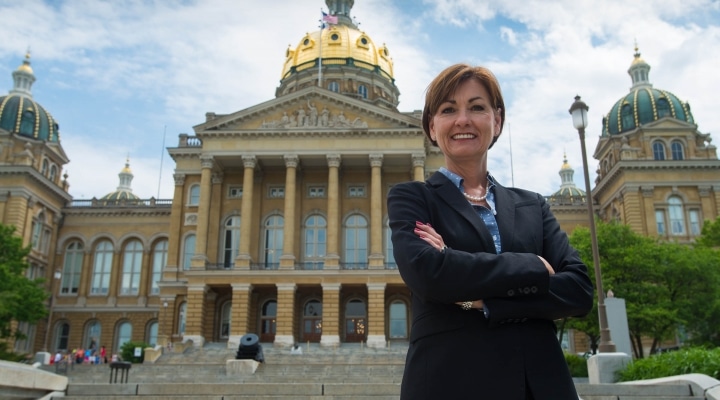 Presented by the ISA board of directors, it recognizes Reynolds for her unwavering support of Iowa agriculture and dedicated advocacy on behalf of soybean farmers. (photo by Joseph L. Murphy/Iowa Soybean Association)

Presented by the ISA board of directors, it recognizes Reynolds for her unwavering support of Iowa agriculture and dedicated advocacy on behalf of soybean farmers.

“Governor Reynolds is a true champion for Iowa agriculture and among the strongest voices nationally for the needs of soybean farmers and rural communities,” said ISA President Jeff Jorgenson of Sidney. “She has an impressive track record of pro-agriculture support and policy accomplishments.”

Serving as the state’s chief executive since 2017, Reynolds has routinely positioned advanced policies helpful to farmers and rural communities.

Jorgenson said her support of biodiesel ranks at the top of the list. In 2019, Reynolds signed an executive order requiring all new state-owned diesel-powered vehicles be able to use biodiesel blends of at least 20% (B20).

One year later, she signed into law a historic extension of the biodiesel fuel tax differential (SF2403). She also led a statewide effort to secure an additional $7 million of federal Coronavirus Aid, Relief, and Economic Security (CARES) Act funding for the expansion of renewable fuel infrastructure in the state.

“As a farmer, you need someone that understands your interests including good roads and bridges, the ability to move product during harvest and the need to keep supply chains moving, especially during a pandemic. One need look no further than Governor Reynolds for that kind of understanding and support.”

In 2020, Reynolds took bold action to protect the state’s prosperity and Iowa agriculture’s future by introducing the Invest in Iowa Act (IIA). While temporarily shelved as the state recovers from Covid-19, the IIA would fund the Natural Resources and Outdoor Recreation Trust Fund, providing sustainable, long-term funding for water quality and conservation across the state.

“The governor has routinely joined Iowa’s federal congressional delegation in the fight against the Environmental Protection Agency’s (and Big Oil’s) nonsensical and unlawful attacks against the Renewable Fuel Standard,” Jorgenson adds. “This work is vital in defending and protecting the critical biodiesel domestic market that adds 13% to the cash price of every bushel of soybeans produced in Iowa.”

“She has demonstrated the grit and tenacity necessary to position the agriculture and soybean industry for sustained success,” he says. “And she’s done so despite a trade war, derecho and pandemic.”

The video showcasing her award presentation can be found on YouTube. More information about the ISA awards program and other 2021 award recipients can be found at www.iasoybeans.com/awards.