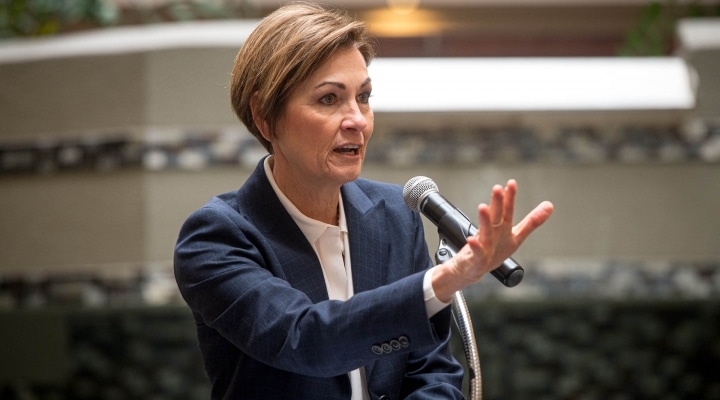 “Farmers know about challenges, and there hasn’t been one we haven’t overcome,” said ISA President Jeff Jorgenson following the Governor’s Condition of the State Address delivered Tuesday night. “Iowans are resilient and essential and the challenges of 2020 will prove it once again. Working together – rural and urban – we’ll come back stronger than ever.”

The continued fight against Covid-19 and recovery from last August’s historic derecho continues to stress farm families. Drought conditions also persist across most of Iowa. And while soybean prices have strengthened the past three months, the rally must be sustained to erase seven years of mostly red ink.

“Farmers are resilient and optimistic by nature,” said Jorgenson, who farmers near Sidney and took the reins of ISA last September. “It’s helps get you through the tough times, make the most of the present and always look ahead to what’s possible.”

One opportunity is acting on the governor’s call for committing $450 million over the next three years to position Iowa as the leader in high-speed internet accessibility.

Jorgenson said low-speed or non-existent broadband hampers the ability of Iowafarmers to keep pace with their peers in other prolific soy producing countries. Once a competitive advantage for U.S. farmers, poor wireless connectivity across large portions of rural Iowa is becoming a competitive disadvantage.

“Agriculture is increasingly high-tech and the pace of adoption is accelerating,” Jorgenson said. “Lacking connectivity is more than an inconvenience for soybean farmers. It stymies innovation and productivity and that has negative consequences for farmers, suppliers and buyers.”

After a prolonged trade war with China, reasserting U.S. soybean farmers as the country’s primary supplier of oilseed and building domestic consumption through expanded bioufels usage and new uses take on renewed emphasis. Examples include increased biodiesel production and using soy polymers in asphalt. Both add value to soybean oil by displacing petroleum-based products while benefiting air and water quality.

While Governor Reynolds’ flagship legislation, the Invest in Iowa Act, will be set aside as the state recovers from Covid-19, Jorgenson said Iowa soybean farmers will also continue to champion the need for sustainable, long-term funding for water quality and conservation. ISA also looks forward to being an active participant in the newly formed Carbon Sequestration Task Force established by the Governor’s Economic Recovery Advisory Board.

“While carbon capture is being considered as the future of farming, we must ensure that any policy solution recognizes and accounts for the benefits and outcomes of water quality and conservation practices,” Jorgenson said