Home » Is carbon the 'crop' of the future? 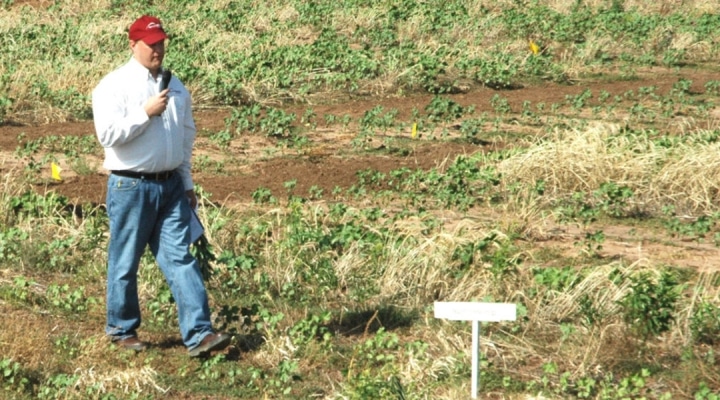 The use of cover crops is one of the land management methods for replenishing carbon in the soil. (Texas A&M AgriLife photo by Kay Ledbetter)

COLLEGE STATION, Texas — An increasing awareness and concern about the environment, changes in government policy, America’s re-entry into the Paris Agreement and a robust demand for carbon offsets all point toward an appetite for a different type of agricultural crop – carbon.

“There has been an increasing amount of discussion on how to create a way for farmers to earn credits for the climate-friendly practices they have implemented or will implement on their operations,” said Joe Outlaw, Ph.D., co-director of the Agriculture and Food Policy Center at the Texas A&M College of Agriculture and Life Sciences and economist with the Texas A&M AgriLife Extension Service, Bryan-College Station. “One of these ways is through carbon farming that would allow for the capture or sequestration of soil organic carbon, making it possible for the sale of carbon credits to corporations so they may offset their greenhouse gas emissions.”

However, many questions on the efficacy of carbon farming and its worth to the farmer are as yet unanswered. Will there be incentives to attract a sufficient number of farmers for it to work? How much trouble will it be to implement and monitor these carbon capture methods? Will some farmers benefit more than others? Will farmers be credited for the actions they have already taken to reduce greenhouse gas emissions?

Carbon constantly cycles through planet Earth. Light energy from the sun functions as fuel for the carbon cycle — a natural process that moves carbon through our atmosphere, biosphere, pedosphere, lithosphere and oceans.

“Human activity has created the need to extract huge amounts of deeply sequestered fossil carbon in the form of fossil fuels,” explained Katie Lewis, Ph.D. with Texas A&M AgriLife Research, a soil fertility scientist in the Department of Soil and Crop Sciences, Lubbock. “When burned, these dense forms of carbon release massive amounts of carbon dioxide.”

She said more carbon dioxide is now being released than the earth’s land-based plant life and oceans can naturally reabsorb. This excess carbon dioxide forms a blanket in our atmosphere, trapping the sun’s heat and leading to changes in the climate.

Worldwide, soils are estimated to contain about 10 times the amount of carbon in the atmosphere — far more than what is found in normal vegetation.

“Carbon farming is seen as a way to help restore balance within the carbon cycle,” Lewis said.   “It also helps soil build a resilience to drought and increases agricultural productivity in a natural way.”

What is carbon farming?

“The idea behind carbon farming is pretty simple — remove excess carbon from the atmosphere and store it in the soil, where it will facilitate plant growth,” Lewis said.

Carbon farming involves implementing agricultural practices that improve the rate at which carbon dioxide is removed from the atmosphere and converted to plant material and soil organic matter. It works by applying agricultural methods such as no-till or conservation tilling for minimal soil disturbance, mulching, composting, rotating livestock and using cover crops as ways of sequestering carbon in the soil.

“Carbon loss from the soil is mainly due to the removal of plant materials that contain carbon, usually at harvest,” Lewis said. “Changes in land management can cause soil carbon increases or decreases, creating a new equilibrium. Variation in climate can also change this equilibrium. Carbon farming can be considered successful when the net amount of soil carbon captured or sequestered exceeds the amount lost.”

Lewis said to accurately estimate soil carbon storage or stocks, soil samples should be collected at a depth that will determine bulk density and organic carbon using a dry combustion method.

“Bulk density is required to convert organic carbon percentage to an actual quantity of carbon in the soil, a stock,” she explained. “The depth of sample collection will be dependent on the depth of the soil and the cropping history. Deeper depths are likely where there is greater storage potential.”

Lewis said another method of estimating carbon storage is through a modeling approach based on management practices implemented within a farming operation.

“Model outputs should then be verified using laboratory tests,” she said.

In all, the Natural Resources Conservation Service, NRCS, of the U.S. Department of Agriculture has identified at least 32 on-farm conservation practices known to improve soil health and sequester carbon. These practices also provide other benefits in relation to water retention, hydrological function, biodiversity and resilience.

Banking on a carbon bank

“Recently, there have been discussions about creating a ‘carbon bank’ at the USDA that would buy and sell carbon credits from farmers,” Outlaw said. “The credits could then be sold to corporations needing to offset their emissions.”

This concept, which has received support from a number of farm, food, forestry and environmental groups, also makes accommodations for early adopters who have led the way in carbon-sequestration practices.

“There hasn’t been a nationwide cap-and-trade effort here in the U.S. for more than a decade, but currently there does appear to be a growing demand for carbon offsets,” Outlaw said. “There are already a number of private credit markets or carbon payment programs being contemplated or developed. That seems to support the notion that carbon farming could potentially be a way for farmers to generate additional income.”

He noted, however, for the overall framework of carbon farming to be successful, it would have to include sound policies, public-private partnerships, accurate quantification methodologies and supportive financing to efficiently implement direct, science-based solutions.

“It will also have to be done at a scale where we can achieve measurable carbon capture that promotes regenerative agriculture focused on creating and maintaining healthy soils that absorb and store carbon,” he said.

The jury is still out on whether carbon farming may be sustainable in the long run.

“There are many technical and regulatory barriers to overcome, as well as concerns by some environmentalists that even its widespread implementation will not substantially reduce greenhouse gas emissions or will provide only a temporary solution,” Outlaw said.

He said there is also concern that carbon farming will primarily benefit certain agricultural regions. Additionally, many farmers may not be able to afford the cost of implementing environmentally beneficial measures without some sort of financial assistance.

Some farmers have been able to receive government payments from the NRCS’s Conservation Stewardship Program to cover the cost of implementing certain conservation measures. However, that funding is capped by the farm bill and there is no long-term assurance of continued payments.

“At this time, there’s really no way to know if carbon farming would be an effective way to fight climate change, but there is no doubt there are many ways to make changes in land management that would improve soil health and benefit the environment,” Outlaw said.

Will carbon farming work for me?

Studies on soil organic carbon sequestration show the Corn Belt, with its good soil, mild climate and reliable rainfall, is one of the best prospects for viable carbon farming. Also, regions of the southern U.S. with long growing seasons and sufficient rainfall, as well as those with substantial irrigation, make viable opportunities for carbon farming.

“Carbon farming likely will be more of a challenge for farmers in hot, dry areas of the country,” Outlaw said. “That’s why there seems to be support for a voluntary system that accommodates for climate differences while providing a range of options farmers and ranchers can choose from to determine the best program for their land.”

The USDA has a web-based tool called COMET-Farm to help farmers interested in transitioning to carbon-sequestering practices. The tool provides an approximate carbon footprint from data supplied by the user and allows farmers to investigate different land management scenarios to see which may work best for them. It also guides the user through describing farm and ranch management practices, including alternative future management scenarios. Once complete, a report is generated comparing the carbon changes and greenhouse gas emissions between the current management practices and future scenarios.

“As an economist and someone who has spent many years in agriculture, my advice would be for producers to do their homework and assess the pros, cons and costs of carbon farming versus its potential economic and other benefits to their operations, then decide if it works for them.”

Don't like your greens? Blame it on Brassica domestication