Subscribe
Home / National / Is a gene-edited animal a drug? 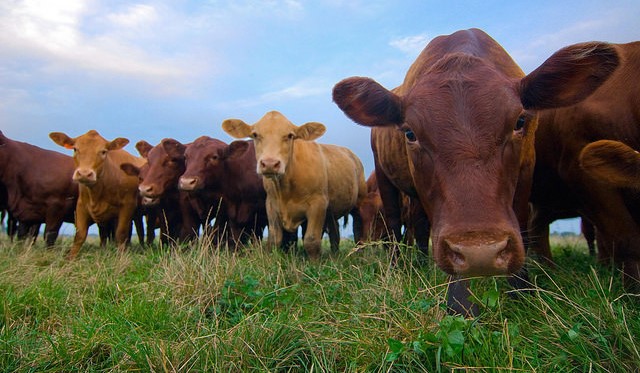 "There is nothing fundamentally hazardous about genetic variation in food, and suggesting intentional alterations are equivalent to drugs will frighten consumers who might logically infer the presence of drugs in their food," states Alison Van Eenennaam , University of California, Davis. (USDA / Ryan Thompson via IIP Photo Archive, Flickr/Creative Commons)

DAVIS, Calif. (THE CONVERSATION) — We eat mutations every day. All the vegetables, grains, fruits and meat humans consume as part of their diet is jam-packed with DNA speckled with mutations and beneficial variations.

In 2017, the United States Food and Drug Administration proposed to regulate a specific subset of these variations as drugs: in particular, those introduced into animal genomes using modern molecular techniques like gene editing. A drug is “an article (other than food) intended to affect the structure or any function of the body of animals” according to the Federal Food, Drug, and Cosmetic Act, which was first signed into law by President Franklin D. Roosevelt in 1938.

I am a geneticist who specializes in how genetics can be used to improve the efficiency of livestock production. While I agree that DNA variation undoubtedly affects “the structure and function of the body of animals,” it is unclear to me why intentional DNA alterations introduced via gene editing in food animals should uniquely be considered a drug. This seems inconsistent given that the United States Department of Agriculture has no plans to treat such alterations in gene-edited plants as drugs because genetic variations are part of conventionally bred varieties. Ultimately this ruling may hinder the use of gene editing to introduce useful attributes – like disease resistance – into U.S. livestock populations.

Is DNA a drug?

DNA – the double-stranded helix that encodes the recipe of life – is definitely a chemical. Everything is made of chemicals – even natural food. DNA, short for deoxyribonucleic acid, is made up of a unique arrangement of four nucleotides: adenine, cytosine, guanine and thymine. But is DNA a drug?

DNA is present in each cell where it encodes the formation and functioning of all of the proteins that comprise the smooth functioning of our body and mind and also the deleterious mutations that can cause cancer or inherited conditions such as sickle cell anemia.

But when DNA is in our diet as a component of food, it is digested and broken into its constituent nucleotides, which are then absorbed and become the genetic building blocks of the eater. Eating a banana poses no risk of transforming the consumer into a banana, despite the fact that a banana is chock-full of cells each containing the entire banana genome.

Selection for more productive and resilient plant and animal varieties has been an incredibly important component of reducing the environmental footprint of food production. Breeders select only the most suitable and fit parents to produce the next generation. Since 1960, global livestock productivity has increased 20 to 30 percent, due in large part to genetic improvements resulting from selective breeding.

For instance, a glass of milk in the United States today has only one-third the carbon footprint of a glass of milk from 1944. Improved genetics are a key component of sustainability.

Although plants and animals produced in conventional breeding programs are routinely measured for production performance, susceptibility to disease, fertility and product quality, they are not normally evaluated at the DNA level prior to commercial release. Tremendous DNA sequence variation, or mutations, exists between perfectly healthy, unremarkable individuals of the same species.

To put this in perspective, one study of whole genome sequence data from over 2,700 bulls in the 1000 Bull Genomes Project revealed over 86 million genetic variations between individual bulls of the same species. These included 2.5 million insertions or deletions of one or more nucleotides, and 84 million nucleotide variants, in which one nucleotide substituted for another. No two steaks from different animals are genetically alike, and every meal you have ever eaten contained a unique assembly of DNA sequences.

Gene editing, which uses tools like CRISPR/Cas9, provides an opportunity to make targeted DNA alterations. Some examples of edited livestock include pigs in which a small deletion provides resistance to the devastating porcine reproductive and respiratory syndrome virus. In dairy cows, some edits yield animals that don’t grow horns, sparing cows from the painful process of physical removal. I believe these edits benefit animal health and welfare, both improvements that tend to be more favorably viewed by the public than those associated with production efficiency.

Human intention results in a drug

Such applications are unlikely to reach the market if intentional DNA alterations are regulated as drugs. The mandatory approval process for animal drugs is understandably rigorous. It requires proof that the drug works, the absence of harmful residues in food animal products, and both animal and environmental safety.

What is unclear is how DNA alterations fit into this rubric. There is nothing fundamentally hazardous about genetic variation in food, and suggesting intentional alterations are equivalent to drugs will frighten consumers who might logically infer the presence of drugs in their food.

How can the absence of something, a snippet of DNA – as in the case of a deletion – be considered “a drug residue,” when an analogous deletion in the genome of a mushroom is not?

When I think of a drug I picture something like aspirin – a chemical with biological activity, often taken to prevent or treat a disease. As with most things in life, a small dose can be helpful, and a high dose can cause harm.

With this in mind, how should drug efficacy be evaluated in the case of genome-edited hornless cows – apart for the obvious fact that such animals don’t grow horns? The hornless variant exists naturally in many beef breeds, including Angus. But, that same DNA sequence introduced through editing into dairy breeds, will be regulated as a drug.

Some South American countries including Argentina have indicated that gene-edited plant and food animals won’t be treated differently from a regulatory perspective. If no DNA sequences novel to that species are introduced using gene editing, then no added regulatory oversight will be triggered. Brazil has ruled it will not regulate hornless cows as GMOs.

However, in the United States gene-edited food animals with intentional genomic alterations that could otherwise have been developed through traditional breeding will be subject to a multigenerational, pre-market evaluation as new animal drugs.

This evaluation will be undertaken irrespective of whether there is any risk or novelty associated with the alteration. Edits that exactly mimic existing sequence variations will trigger evaluation. Surely novel product risk, if any, should be the focus of regulatory oversight, and not what method a breeder used to introduce genetic variation.

As a result, U.S. animal geneticists are starting to move their gene-editing research to other countries. Innovative startups are forming partnerships with foreign companies in countries with product risk-based regulatory systems.

In the absence of sensible regulation of the breathtaking genetic variation that exists naturally in our food species – which is generally regarded as safe – innovation will emigrate. If intentional DNA alterations are shoehorned into a century-old regulatory framework, research exploring the introduction of sustainability traits like disease resistance, climate adaptability and animal welfare into U.S. livestock breeding programs will be thwarted, harming American agriculture and food production.

This article is republished from The Conversation under a Creative Commons license. Read the original article here: http://theconversation.com/is-a-gene-edited-animal-a-drug-112358.