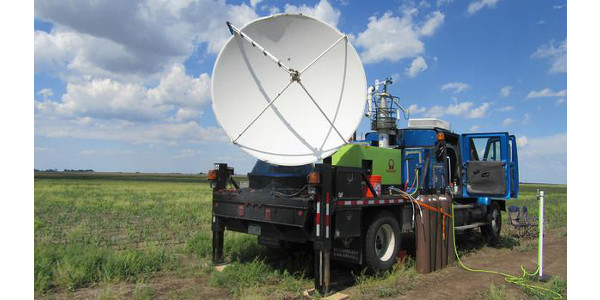 A Doppler on Wheel collects data. (Courtesy of University of Nebraska-Lincoln)

LINCOLN — A national team led by the University of Nebraska–Lincoln is studying potential links among irrigation, cloud formation and rainfall.

Funded by the National Science Foundation, the Great Plains Irrigation Experiment — or GRAINEX — is gathering weather observations in June and July from a 3,600-square-mile region in southeastern Nebraska. The timing allows the team to better understand how irrigation may affect climate conditions at the start of irrigation season in June through late July when irrigation peaks.

“The study area includes a transition from extensively irrigated areas to dry land or non-irrigated areas,” said Rezaul Mahmood, lead researcher and director of Nebraska’s High Plains Regional Climate Center in theSchool of Natural Resources. “In other words, the experimental setting provides a unique opportunity to investigate the influence of these two noticeably different land surfaces and land covers side-by-side.”

Results of the study could be used to better inform agricultural planning and weather forecasting in the United States and around the world, Mahmood said.

Scientists have shown that widespread global irrigation is adding significant amounts of water to the land surface and is altering regional land use and land cover. These changes can affect local and regional weather development, including cloud formation and rainfall, but the link hasn’t been fully fleshed out.

“Prior studies have found that the Great Plains is a hotspot where soil moisture plays an important role in cloud formation and precipitation,” said Nick Anderson, a program director in the National Science Foundation’s Division of Atmospheric and Geospace Sciences, which funded the research. “Land use change and irrigation due to agricultural activities could be important factors affecting land-atmosphere interactions in this region.”

In May, the researchers from six partnering institutions — Nebraska, Western Kentucky University, the University of Alabama at Huntsville, the University of Colorado Boulder, the National Center for Atmospheric Research, and the Center for Severe Weather Research — started collecting weather observations at five locations in Nebraska.

The team has deployed 80 temporary meteorological stations and is measuring the fluxes of water and energy from six irrigated and six non-irrigated locations. It is also gathering radar observations of the lower atmosphere from three locations and adding two surface-based locations capable of observing and collecting data on the lower atmosphere. The researchers also are sending up 600 weather balloons to collect data on the atmospheric pressure, temperature, humidity and wind speed every two daytime hours for 15 days.

“Several times, I asked myself if I was asking for too much or trying to do too much,” Mahmood said, especially once he discovered the trucks hauling helium to the testing sites were too heavy to cross the rural route bridges. “But we want to do good science.”

All the data will be analyzed and used alongside modeled applications to determine if and how irrigation is affecting precipitation in the Great Plains. For modeling, the team will use Nebraska’s Holland Computing Center and other computational facilities.

Researchers on the project include Udaysankar Nair of the University of Alabama at Huntsville, Eric Rappin of Western Kentucky University and Roger Pielke Sr. of Colorado. The team is working closely with the Nebraska State Climate Office, Nebraska Extension and Natural Resource Districts in the study area.

Clinic for those who have inherited farmland

Planting seeds of success at NCTA