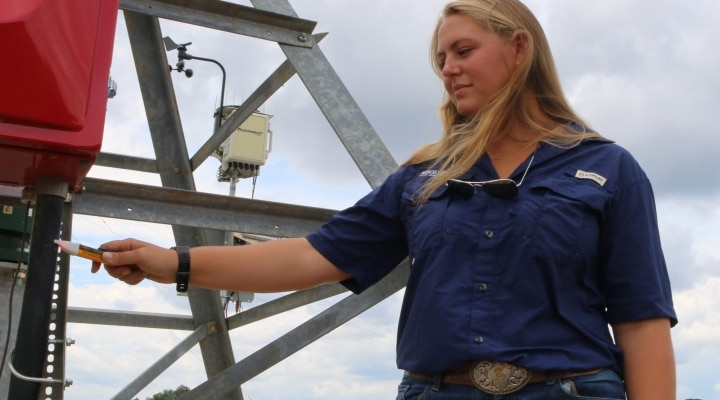 CLEMSON, S.C. — It’s summer, farming is in full swing, as are thunderstorms and lightning.

For farmers who irrigate, Clemson Extension agents say spending a few extra bucks can help save a life or prevent permanent disabilities.

Lightning and thunderstorms typically occur during spring and summer months when farmers irrigate. Lighting can be deadly if farmers do not properly check their irrigation systems.

Chase Smoak, Clemson University Cooperative Extension Service horticulture agent for Lee and Sumter Counties, reports a local farmer was checking his center pivot irrigation system when a storm blew in. The farmer could have been electrocuted had he not spent a few seconds to take one important step.

“After the storm had passed, he noticed the pivot was not functioning correctly, so he used a voltmeter to test the pivot before opening the panel box,” Smoak said. “The pivot carried an electrical charge and the outcome could have been life-threatening had the farmer not checked the system.”

Voltmeters are used to measure voltage of direct currents or alternating currents. Some voltmeters cost around $5. Charles Davis, Clemson Extension row crop agent for Calhoun and Richland Counties, said this is small price to pay for such an important tool.

“Lighting can strike an area before, after, and, in the absence of rain, so it is good to get in the habit of using a tester to check a system each time before touching it,” Davis said. “Test before you touch. It could save your life.”

After a storm has passed, people should check their pivot irrigation systems with voltage testers to avoid injury or possible death. They should also ensure ground rods are correctly installed and securely connected to the system.

The Clemson Extension Ag Safety and Water Resources Program team is mailing noncontact voltmeters to a list of South Carolina farmers with center pivot irrigation systems. Water Resources team member Becky Davis said irrigators who don’t get a voltmeter can contact her at (803) 245-2661 or rwllms@clemson.edu and have their name added to the list.

“A voltmeter is an important tool everyone irrigating with center pivots should have on-hand,” Davis said. “But it’s a tool that can give you a false sense of security if not used properly. Always confirm the proper operation by first checking a known live circuit and by reading the manufacturer’s instructions to understand its limitations.”

Mark Davis, owner/operator of Broadwater Irrigation in St. Matthews, South Carolina, has been working with irrigation systems since he graduated from Clemson in Agricultural Mechanization and Business in 2007. He said irrigation system operators must keep safety in mind.

“Operators shouldn’t get complacent,” he said. “They should always conduct safety checks, as well as use important safety measures when operating a system. This could mean the difference between life and death.”

Safety measures include checking to be sure the system is properly grounded and “backhanding” the pivots to prevent possible electrical shock.

“If a metal pivot is energized and a person grasps it with their palm, the electrical current can cause their hand to clamp around it and the person most likely will be electrocuted.”

Other tips when working with irrigation systems include not wearing jewelry and not working alone: Always have someone with you or let someone know where you’re going. Wear rubber-soled boots and don’t get on your knees to check something low.

“I always squat so that my rubber soles are touching the ground,” he said. “The ground can accept an infinite amount of electricity, whereas the human body can’t.”

From the weather desk

Melissa Griffin, assistant state climatologist with the South Carolina Department of Natural Resources, said people should wait 30 minutes after the last lightning strike before resuming activities outdoors. She offers some safety tips for anyone who works outside.

“Continually monitor the weather,” Griffin said. “Just because a day starts with clear, blue skies does not mean it will end that way. Thunderstorms can form rapidly during the summer and calm conditions can change quickly, especially during the afternoons.”

The Occupational Safety and Health Administration (OSHA) lists farming as an occupation where workers are at high risk of lightning-related exposure. To help ensure everyone’s safety when working outdoors, businesses must have lightning safety plans that include a written lightning safety protocol. This should:

This information should be posted at outdoor worksites and all employees should be trained to follow all safety procedures.

Finally, Griffin said everyone should be inside during a storm, but people who must be outside should know the location of the nearest shelter. She also advises people to avoid open areas such as fields, ditches and retention ponds, as well as not holding metal objects such as tools, rakes, shovels and pruners – anything that can transmit or conduct electricity.

It is best to postpone farming activities if possible.

“If bad weather is already in the area, consider putting off outdoor plans until another day or time when the weather is better,” she said. “Outdoor workers need to take lightning seriously and be prepared to react quickly to ensure their safety.”