Home / Oklahoma / Irrigation expert Sharma joins OSU
A new user experience is coming! We'll be asking you to login to your Morning Ag Clips account March 1st to access these new features.
We can't wait to share them with you! Read more here. 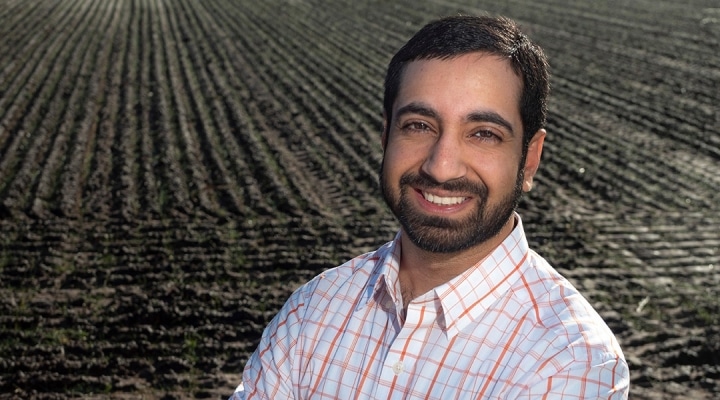 Sumit Sharma has joined the Oklahoma Panhandle Research and Extension Center in Goodwell as an Oklahoma State University Extension assistant irrigation specialist. He hopes to do meaningful work that can help enhance agricultural operations in the region while also protecting in-demand water resources and local economies. (Courtesy Photo)

GOODWELL, Okla. — From the ground below to the sky above, far western Oklahoma is the perfect location for Sumit Sharma of the Oklahoma Panhandle Research and Extension Center in Goodwell.

“The local farmers are nice and there are great opportunities to do meaningful work that can help enhance agricultural operations in the region while also protecting in-demand water resources and local economies,” said Sharma, who was hired as an Oklahoma State University Extension assistant irrigation specialist at the Goodwell center in March.

Numerous studies have indicated the water table is dropping in the Ogallala aquifer, which underlies the Oklahoma Panhandle and parts of Texas, New Mexico, Kansas, Colorado, Nebraska, South Dakota and Wyoming. From wheat and cows to sorghum, corn and cotton, the regional economy relies heavily on agriculture irrigated by Ogallala groundwater. Residential and industrial uses also draw from the aquifer.

“Dr. Sharma recently completed his post-doctoral studies at the center, where his research and educational efforts had a significant positive impact on the region,” said Jeff Edwards, head of OSU’s Department of Plant and Soil Sciences. “Adding him as a faculty member means local agricultural producers and OSU water programs will continue to benefit from his expertise.”

The Ogallala aquifer accounts for about 30% of all irrigation in the United States. Unfortunately, numerous studies have shown the aquifer recharges much slower than water is withdrawn.

“We’re currently going through three years of data looking at irrigation water distribution, with an emphasis on different treatments and technology,” Sharma said. “We’ve also been involved in a greenhouse gas emission study of dryland sorghum. As always, our goal is to develop practical, cost-effective solutions that target real-world issues and concerns.”

Sharma said the Oklahoma Panhandle reminds him of Punjab, India, where he grew up, just with less rainfall. The Punjab provides about 10% of the country’s grain production. The region relies heavily on irrigation.

But that is not the only reason why Sharma looks upon the panhandle with such favor. He is an avid hiker and has traversed Black Mesa. He plans to do so repeatedly. Then there is the night sky.

“My parents and grandparents used to tell us kids about the stars, which led to my interest in astronomy,” Sharma said. “We used to have a lot of power outages back in India, which gave us clear nights. The rural nature of the Oklahoma Panhandle provides a similar view, just without the outages. As for the sunsets – wow.”

“I’m definitely in the right place,” Sharma said. “Working to provide the latest in irrigation advances is important to the region, plus you get a magnificent view of the Milky Way. Maybe the center can host official water resource demonstrations during the day and informal astronomy sessions at night. Wouldn’t that be something?”

The Oklahoma Panhandle Research and Extension Center’s projects and programs are conducted as part of two state agencies administered by the university’s Division of Agricultural Sciences and Natural Resources: OSU Extension and the Oklahoma Agricultural Experiment Station system.

More and more viruses ‘spilling over’