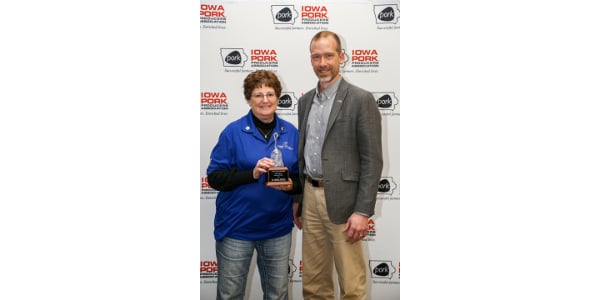 Cherokee County's Janet Sullivan was named the state winner of the award presented by the Iowa Pork Producers Association (IPPA). (Courtesy of IPPA)

CLIVE, Iowa — The women and men involved in Iowa’s pork industry are both enthusiastic and dedicated to the work they do to promote pork, as well as pig production in the state. That’s why the Iowa Pork Producers Association (IPPA) tips its hat each year to those local folks who drive those efforts.

State Belle Ringer Award Winner
Five women from across Iowa vied for the top Belle Ringer award during Iowa Pork Congress in late January. All received the local Belle Ringer designation for the key roles they play in their county pork producer organizations.

Cherokee County’s Janet Sullivan was named the state winner of the award presented by the Iowa Pork Producers Association (IPPA).

Sullivan, of Aurelia, has served on the Cherokee County Pork Producers board in numerous positions and committees. For more than 20 years, she has been a catalyst for getting projects done. She coordinates the county fair pork producers food stand, golf outing, annual banquet, Ag Day, and pork grillings that happen every Friday through the summer. She even designed the pork trailer that is used for these events.

Not only does she make sure there is pork at these events, she is also known for providing her made-from-lard pie crusts on 60-70 pies served during the county fair as well as providing pies for the Cherokee County Pork Producers scholarship pie auction. Her outreach to younger students includes facilitating on-farm tours for fifth graders and Ag Safety Day for fourth graders.

At the state level, Sullivan serves on the Iowa Pork Tent committee and works several days at the Iowa State Fair. She also served on the IPPA promotion committee for several years.

State Winner of the Hog Wild Award
Six men from across Iowa vied for the top Hog Wild award during Iowa Pork Congress. All received the local Hog Wild designation for the key roles they play in their county pork producer organizations.

Jeff Monk of Allamakee County was named the state winner of the award presented by the Iowa Pork Producers Association (IPPA).

Monk, who lives near Waukon, is the president of the Allamakee County Pork Producers, an organization which was just reactivated this past year. He spearheaded that effort. Reactivating an organization is more than just asking for memberships, it’s also about sharing his passion for Iowa’s pork production by organizing events and promoting pork. Not only has Monk handled coordination of many events, he’s also helped with grilling pork at the county fair, at an area corn maze and at football games at the three county high schools. At the state level, Monk assists with the Iowa Pork Tent at the Iowa State Fair, ag in the classroom events, and serving on the public relations and membership/leadership committees.

Awardees Share Qualities
The individuals nominated for both the Belle Ringer and Hog Wild awards show the highest qualities of leadership, dedication and commitment to the activities that promote the Iowa pork industry. The IPPA promotion committee selects the nominees and winners of the state awards.