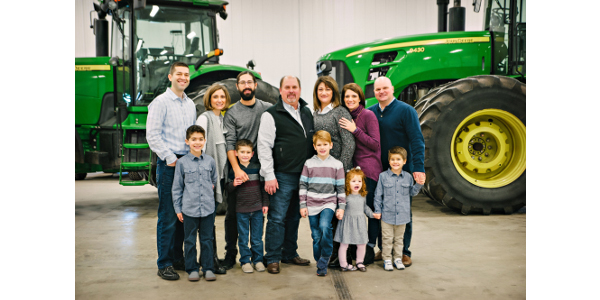 SPRINGFIELD — The Zehr Family from Washington, IL has been named the 2017 Family of the Year from the Illinois Pork Producers Association. This award is announced each year during the Illinois Pork Expo and is given to a family who has done an outstanding job of promoting the pork industry and exemplified leadership throughout the year.

Curt and his wife Sue, are the proud owners of Zehr Farms, which operates 1,700 acres of corn, soybeans, and wheat, along with a 140-sow farrow-to-finish farm that specializes in Durocs. His passion for agriculture and the swine industry stems from his parents, Dean & Kathy Zehr, who were active in the association.

Life has highs and lows, but the Zehr’s experienced a devastating low in November 2013 when a tornado hit their home. Curt and his wife, Sue, showed resiliency during this trying time. Curt focused on keeping the farm going, while Sue made plans and followed the rebuilding of their home over 11 months.

Curt and Sue have three grown children, twin daughters, Angie and Beth, and a son, Michael, and five grandchildren. Since the 1940’s, showing pigs has been a tradition for the Zehr family. In addition to local shows, they have exhibited at the Illinois State Fair and the North American International Livestock Expo in Louisville, Kentucky.

Angie is a graduate of Goshen College, where she met her husband, Jon Short. Jon is currently the President of Marquee Health and Angie has made the decision to be a stay at home mom to their two sons, Bennett (7) and Davis (4), and daughter, Sawyer (2). Before that she was a NICU nurse for 12 years. All three kids love spending time with Mimi and Papa Curt on the farm.

Beth is a Marketing Coordinator for the Illinois Bariatric Center. She also attended Goshen College where she met her husband, Andy Reeser. Andy is an IT Manger at State Farm and farms with his parents on their grain farm. Beth and Andy have two sons, Grant (8) and Garrett (6), who love showing pigs and helping dad and both grandpas on the farm.

Michael continued the family tradition graduating from Goshen College. He recently moved to Bodega, California from Nashville, Tennessee where he was employed as an arborist. When he comes home he still enjoys helping dad on the farm.

Curt has been involved in many organizations locally and at the state and national levels. Locally he has served as a member and officer of the Tazewell County Pork Producers and as a 4-H Fair Swine Superintendent from 1985-2014. He also served as a director and vice president of Grainland Elevator Co-op.

He has served on several national committees including, National Swine Registry Commercial Breeders, National Pork Board Animal Science and Budget Task Force. He has attended the National Pork Forum five times as a delegate for the Illinois Pork Producers Association. Also at the national level he served as a director and Treasurer for the United Duroc Swine Registry.

The 2017 IPPA Family of the Year will be added to the list of industry awards Curt has received, which include the 2000 Pork All-American, 2015 Illinois 4-H Hall of Fame, and the 2016 Illinois Purebred Breeders Hall of Fame Award.

Curt and his entire family have been a fundamental part of the swine industry for many years. The Illinois Pork Producers Association is delighted to present the Zehr Family with 2017 IPPA Family of the Year.