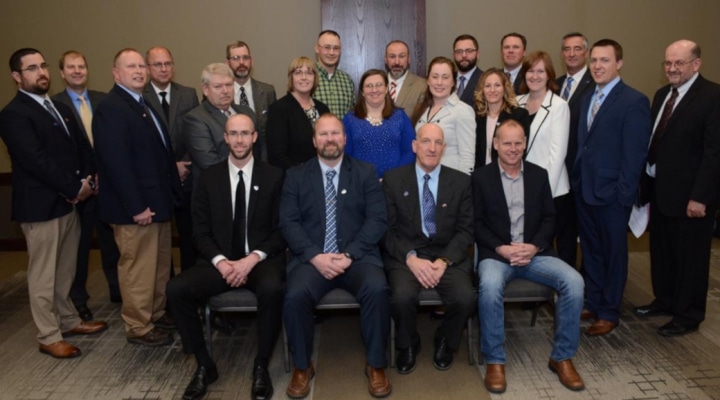 The 2020 Illinois Pork Producers Association Board of Directors was filled out after delegates elected four new members during the IPPA annual meeting. (Courtesy Photo)

SPRINGFIELD, Ill. — During the 2020 Illinois Pork Producers Association (IPPA) annual meeting, the delegate body elected four new members to the board of directors.

The IPPA board consists of six district representatives, twelve at-large positions, and representatives from the following organizations: Illinois Farm Bureau, Illinois Purebred Council, National Pork Board and National Pork Producers Council. They meet quarterly to discuss promotion of pork products and meeting the needs of pig farmers across the state.

Cheryl Walsh was recently elected to an at-large position. She, and daughters Reagan and Rylie, reside in Princeville. Cheryl is a fourth-generation farmer in Peoria County where she is part owner in Cowser Inc., their family farm. They have a breed-to-wean farm housing over 2,200 sows. They also raise row crops and some beef cattle. She is a township director on the Peoria County Farm Bureau and very involved with their Ag in the Classroom program.

Katie Brown, and husband Ethan, are from Morrisonville. Katie now fills an at-large director position. She is a senior research manager with The Maschhoffs, LLC where she gets to travel all across the Midwest to work with producers on problems they face in everyday pork production. Katie previously served as both a county and state pork ambassador and volunteers on multiple IPPA committees. Along with raising pigs on her family’s fifth-generation farm in Montgomery County, she and her husband grow row crops on their own farm in Christian County.

Rachel Schulte, along with husband Kyle and daughter Reagan, reside in Oakford. Rachel is also filling an at-large director position. She is a swine veterinarian with Carthage Veterinary Services, LTD where she services farmers in both Illinois and Indiana. Rachel has also had the opportunity to present on the topic of biosecurity in China. She enjoys volunteering at the Pork Patio during the state fair and assists with other IPPA youth events. Her husband also works in the pork industry and raises crossbred and Yorkshire show pigs.

AJ Kilfoil, with wife Hilary and kids Cooper and Lydia, resides in Monmouth. AJ is the new Allied Industry Representative. He is a station manager for Lynch Livestock at the Monmouth location. He was raised on a purebred Hampshire breeding stock farm in central Indiana and continues that tradition here in Illinois with his family. He has been a hog buyer for the past eight years.