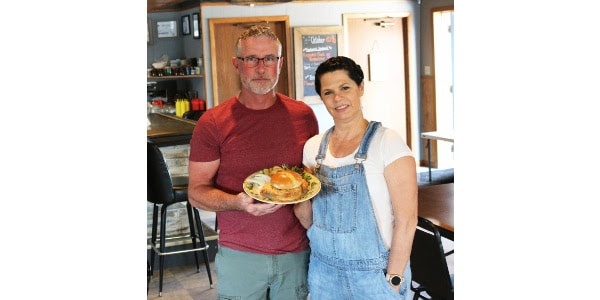 CLIVE, Iowa — Loren Lacy has spent nearly four decades comparing breaded pork tenderloin sandwiches from eateries across Iowa. So when he and his wife Amy bought a restaurant about a year and a half ago, they set out to make their sandwich better.
Their tenderloin became a top seller at PrairieMoon On Main in the small town of Prairieburg, about 30 miles northeast of Cedar Rapids. And now, it is award-winning with the coveted title of Iowa’s Best Breaded Pork Tenderloin. The 18th annual contest is presented by the Iowa Pork Producers Association (IPPA) and managed by its restaurant and foodservice committee.

“Iowans take their tenderloin really seriously, so when we found out we ranked in the top 40, I think I cried—we were so excited,” Amy Lacy said. “And when the judges told us were in the top five, I shook. This is just crazy for us.”

For Loren Lacy, a good tenderloin is not so much about the breading, but rather the flavor and tenderness of the pork. PrairieMoon has a local grocer cut loins into half-pound slices before twice running each piece through a tenderizer.

At the restaurant, tenderloins soak for 24 to 72 hours in buttermilk, an acidic liquid that further tenderizes the pork. The never-frozen meat is then dredged through an unseasoned, dry, fine cracker meal, and fried to order. Sandwiches are served with lettuce, tomato, onion, and pickles.

Amy Lacy began experimenting with her tenderloin technique about six years prior to opening PrairieMoon, when she and her husband managed the Wapsipinicon Country Club in Anamosa, in Wapsipinicon State Park.

“At that point, I thought you had to press them out because everybody wanted a huge tenderloin that, you know, covered a pizza box,” she said. But at PrairieMoon, loins aren’t pounded or pressed, so “they stay nice and thick and juicy.”

The week after being announced as a top five finalist, PrairieMoon’s tenderloin orders nearly tripled, from 75 to 100 sandwiches to more than 300 sold. To keep up with the spike in traffic and demand, local residents are on call to assist PrairieMoon’s single server during busy times.

The IPPA restaurant and foodservice committee is officially presenting the award today at the restaurant. PrairieMoon will received $500, a plaque, and a large banner to display. In addition, the first 1,500 tenderloins sold are discounted $1, courtesy of IPPA.

“We want to encourage folks to go try the winning sandwich and support locally owned restaurants, which have suffered a heavy blow from COVID-19 closures and occupancy restrictions,” said Kelsey Sutter, IPPA marketing and programs director.

IPPA judges selected Birdies, Burgers & Brews, located at Hillcrest Golf & Country Club in Graettinger, as the runner-up in the 2020 contest; that establishment will receive $250 and a plaque from IPPA. Rounding out the top five finalists (in no order) are Bents Smokehouse & Pub, Westgate; The Blind Pig, Cedar Rapids; and Sasquatch Jacks Hideaway Barroom & Grill, Waverly. These restaurants will receive a Top Five plaque to display.

IPPA received 4,501 nominations for 390 different establishments during the spring nomination period. The restaurant and foodservice committee judged the top 40 restaurants in the summer, scoring each on the quality of the pork, taste, physical characteristics, and eating experience.

The tenderloin contest recognizes Iowa dining establishments that offer hand-breaded or battered pork tenderloins as a regular menu item. To win, nominated businesses must normally be open year-round; however, the IPPA committee took into account the effects of the pandemic and Gov. Kim Reynolds’ orders regarding restaurant operations this year.

The winners are announced as part of #Porktober20, or October Pork Month, which celebrates the state’s dedicated pig farmers, local restaurants and their hardworking teams, and a famous Midwest favorite—the pork tenderloin sandwich.

The Pub at the Pinicon in New Hampton won the 2019 contest. See the full list of past winners.