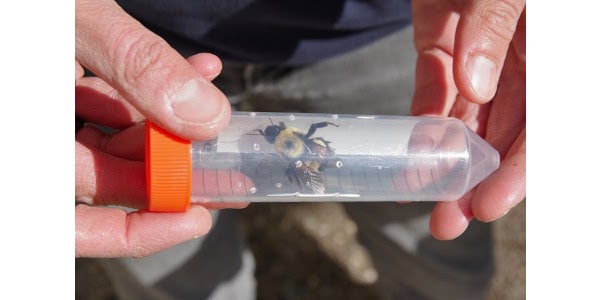 AMES, Iowa — For the first time in three years, an endangered bee species is creating a buzz in central Iowa.

The students were by some apple trees in Fredericksen Court on the north side of Iowa State University’s campus when they made an unexpected discovery.

A rusty patched bumble bee was buzzing inside the test tube they temporarily place the captured bees in while identifying the insects. This species was placed on the endangered species list by the U.S. Fish and Wildlife Service in January 2017, and there are no verified records of it being seen in Ames since 2018, according to a Prairie Rivers of Iowa press release.

“It was exciting because there are people who spend years looking for the rusty patched bee and never find one,” Poore said. “Not only did we find one, but it was the queen bee.”

Ibarra-Garibay knows how rare it can be to see one. She spent two summers working for the Department of Natural Resources looking for the bee without success.

Toth, who was accompanying the students at the time the endangered bee was collected, said, “This is an important discovery because it confirms this endangered species is still surviving in our area. It’s amazing this discovery happened on campus, right next to dorms, literally right under students’ windows. The Iowa State campus area may harbor a viable population that could be useful to study this species’ survival. And it goes to show that rare and wonderful things may be right under your nose – it just takes observant eyes.”

Another confirmed sighting of the bee was reported July 28 by David Stein (’17 MS ecology and evolutionary biology), watersheds and wildlife coordinator with Prairie Rivers of Iowa in Ames, as he was doing some work for the Ioway Creek restoration project in Ames’ Brookside Park. He spotted the worker bee flying around a patch of wildflowers along the creek.

“I was very flustered,” Stein said of the moment he realized it was the endangered species. “When I wasn’t expecting to find it, there it was.”

Stein said following the news coverage of his sighting, there have been several other reported sightings of the endangered bee species, including ones in west Ames and at Moore Memorial Park in north Ames.

Typically, rusty patched bees are not found west of the Des Moines River. Stein said other than the isolated population that seems to inhabit the Ames and Boone areas, the species won’t be found anywhere in the state other than in the Cedar Rapids area, farther north into Minnesota and east into Illinois and Wisconsin.

Habitat plays a role in bees’ population
Finding these bees in Ames is a good sign and shows the area’s habitat is supportive of the insects. Poore has been working with a group of fellow Iowa State students to make the public more aware of bees and the need for conservation efforts to improve native bees’ habitat.

“We’re hoping to raise awareness of the native bees that are flying all around us,” Poore said. “There are more bees than just honeybees and bumble bees.”

Stein said populations of the rusty patched bumble bee have decreased by 87% in the past 20 years. This decline can be attributed, in part, to increased pesticide use and fewer native plants that provide habitat for the insects. He encourages central Iowans to consider incorporating more native plants, particularly Joe-Pye weed, bee balm and yellow and anise hyssop, into their landscapes, as well as to avoid land modifications that could impact bees’ habitats.

Anyone who comes across what they believe may be the rusty patched bumble bee should take photos and video of the bee and submit the images, as well as information about when and where the bee was spotted, to Prairie Rivers of Iowa, dstein@prrcd.org, or upload them to www.bumblebeewatch.org or iNaturalist.org for positive identification.

“Having everyone on board and taking pictures of these bees will give us such rich data so we can better track where these bees are located and how many are out there,” Stein said.

Next steps after agreeing to edge-of-field practices