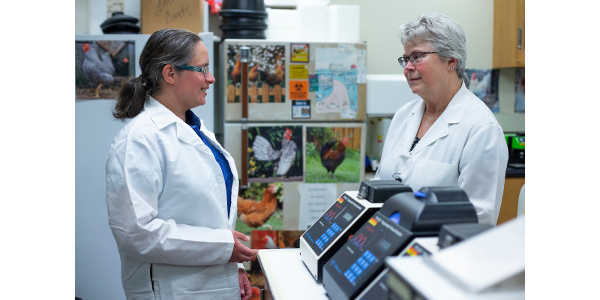 AMES, Iowa – In poultry breeding, the ability to more quickly and accurately select chickens whose offspring will have the best health, egg production and egg quality benefits producers and consumers alike.

Research applying advances in the field of genomics — the branch of molecular and statistical genetics concerned with identifying genetic variation and applying that knowledge — is transforming the poultry industry, thanks to scientists like Anna Wolc (pronounce as Volts), an adjunct assistant professor in the Department of Animal Science at Iowa State University.

Since 2013, Wolc has had dual roles as an Iowa State faculty member and as a genomics geneticist for Hy-Line International, a Dallas Center, Iowa, company recognized as a world leader in poultry genetics. The arrangement was a first-of-its-kind partnership with Iowa State, in which the company donates part of Wolc’s time to the university for research and teaching.

“Traditional breeding takes generations to track results,” said Wolc. “Selection methods have long been based on observable characteristics — phenotypes — that can be seen and measured. For layers, these traits of interest would include the number of eggs laid, egg weight and quality, and health-related traits like feather cover, survivability and disease resistance.”

“My research looks at whether genomic information obtained from DNA genetic testing and analysis can better predict which birds will produce more and better quality eggs,” she said. “We found we can use genomic information to identify the best birds faster, to shorten the time it takes to see change.”

Genomics is a new field for poultry science,” said Danny Lubritz, Hy-Line’s director of research and development. “Anna is combining genotyping with novel statistical methods to improve the accuracy of breeding values and develop them in ways that are practical for the industry,” he said.

“As an example, we are dealing with sex-limited traits in the layer industry,” said Lubritz. “Since males don’t lay eggs, or contribute any data of their own, we rely on combining what we know of their genotypes with the observable phenotypes of their sisters. Anna is giving us modeling tools to more quickly and accurately predict which males have the best genetic potential.”

A research article by Wolc and colleagues in the peer-reviewed Journal of Animal Science was recently recognized with the prestigious American Egg Board Research Award presented by the Poultry Science Association.

The article looked at a trait, called dynamic stiffness, that is an indicator of how much force is needed to crack an egg. The trait is important because higher numbers of broken eggs impact economics for both producers and retailers, and cracked eggs pose food safety risks for consumers.

“In part, egg quality, including dynamic stiffness, is a function of age,” said Wolc. “We were trying to learn if one test adequately predicts the quality of the eggs a hen will lay over its life, or if you really need to test eggs at different ages. We found that you do need to test over time because a hen’s genetic potential for shell quality is expressed differently as she ages.

“This finding lays the groundwork for a new model of evaluating hens that should translate to better selection of future generations of birds with the genetic potential for improved shell quality,” said Wolc.

“The disease caused a big disaster in 2015 when it killed vast numbers of birds in Iowa and elsewhere,” said Wolc. “But typically, a few birds in affected flocks survive and remain healthy.”

She and her team obtained blood samples from survivors to search for genetic markers that could be linked to resistance to the disease.

“We’ve identified one gene that looks promising,” said Wolc. “Right now, we are cooperating with scientists at the Roslin Institute in Scotland to do laboratory testing to see if that candidate gene can keep the virus from entering the cell.”

“This research has huge implications for the future of egg production,” said Susan Lamont, interim director of the Egg Industry Center at Iowa State and a Charles F. Curtiss Distinguished Professor of Agriculture and Life Sciences in the Department of Animal Science.

“It is really helping bring genomic technologies into animal improvement,” said Lamont. “Improving birds’ natural disease resistance has many benefits for the industry, for consumers and for animal welfare.”

Lamont is working with Wolc to research two other important poultry diseases, caused by E. coli and the Newcastle Disease virus.

“Anna is a wonderful collaborator,” said Lamont. “Among her strengths are her creativity, hard work and intimate knowledge of the poultry genetics industry.”

Wolc has been at Iowa State since 2010 when she came to work as a postdoctoral researcher with professor Dekkers. She is originally from Poland where she earned a bachelor’s and PhD in genetics and animal breeding from Poznan University of Life Sciences and a master’s in theology from the University of Poznan.

Wolc’s initial fascination was (and still is) horses. “But chickens make better subjects for genetics research,” she said. “The good thing about chickens is you can see changes more quickly than other animal species — two generations per year.”

“I like applied research and working on something useful,” said Wolc. “It’s exciting to have the possibility of seeing changes in real things and have impact on animals that are a major source of protein for the human population on a global scale.”

Hy-Line International is a world leader in poultry layer genetics. Founded in 1936 by Henry A. Wallace, Hy-Line was the first poultry breeding company to apply the principles of hybridization to commercial layer breeding. Today, Hy-Line International continues to be a pioneer as the first company with its own in-house molecular genetics team leading the industry in application of DNA-based technology to its breeding and genetics program. Hy-Line produces and sells both brown and white egg stock to more than 120 countries worldwide and is the largest seller of layers in the American egg industry and around the world.

Grill your burger to perfection