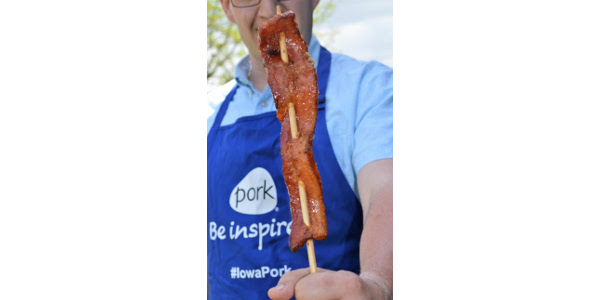 The Brown Sugar Pork Belly on a Stick available at the Iowa Pork Tent during the Iowa State Fair has been voted as one of the top three new foods for the fair. (Courtesy of Iowa Pork Producers Association)

DES MOINES, Iowa (readMedia) —Three new Fair foods will be competing for the coveted 2018 Iowa State Fair People’s Choice Best New Food Award. Finalists include the All Iowa Belly Up Burger from The Rib Shack and the Apple Eggroll from Applishus as selected by a celebrity panel of judges on July 17. Fair enthusiasts casted their vote via the Iowa State Fair App to save their favorite food. Brown Sugar Polk Belly on a Stick from Iowa Pork Producers was selected as the third finalist.

Apple Eggrolls – Egg rolled wrapped with Apple filling sprinkled with cinnamon sugar and can be dipped in caramel. The Apple Eggrolls are located at the Applishus Stands – East Canopy of the VI Building, Cultural Center Courtyard, South Side of Walk on Triangle and North West Corner of Walnut Square for $5.

Fairgoers can sample the top three finalists and cast their vote Thursday, August 9 – Tuesday August 14. The winner will be announced on Wednesday, August 15 during the Fair.