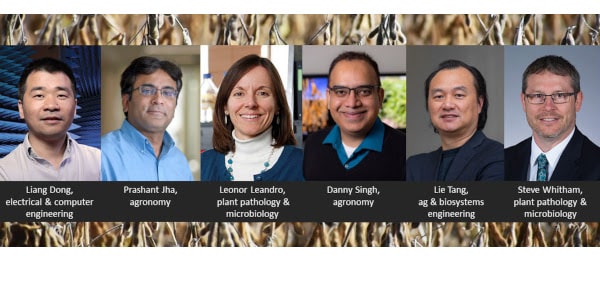 AMES, Iowa — The Iowa Soybean Research Center recently awarded funding for four soybean research projects at Iowa State University, the largest level of funding invested in a single year by the ISRC since its inception in 2014.

The center’s Industry Advisory Council met in September to consider several research ideas and offer guidance on how to invest the funds that were available. Due to the high quality and innovativeness of the proposed research, and thanks to increased financial support provided by the Iowa Soybean Association, the ISRC granted a total of $320,000. The funded projects are described below.

ISRC Director Greg Tylka said, “We are very grateful for the thoughtful discussion and guidance of the farmers and industry representatives on the center’s Industry Advisory Council along with the increased financial support provided by the Iowa Soybean Association. We thank the Iowa State researchers who submitted ideas, several of which were research concepts that were revised and improved based on feedback and guidance from the Advisory Council. The breadth of the research ideas considered for funding this year was notable and included collaborations of researchers combining talents and knowledge in different areas of expertise making the research multidisciplinary in ways we had not seen before.”

“Membership on the ISRC Industry Advisory Council continues to grow, as do company contributions and commitment from insightful council members. This year’s council discussion was enhanced by several innovative and potentially high-impact research proposals coming from small interdisciplinary teams. In the end, farmers representing the checkoff and company representatives provided funding and recommendations to support several important projects,” said Ed Anderson, senior director of research for the Iowa Soybean Association and chair of the ISRC advisory council.

The ISRC is a formal collaboration of Iowa soybean farmers, industry partners, the Iowa Soybean Association and Iowa State University’s College of Agriculture and Life Sciences. Current industry partners include AMVAC, BASF, Bayer, Cornelius Seed, Corteva Agriscience, FMC, GDM, Innvictis/Simplot, Merschman Seeds, Syngenta and UPL. Each industry partner has a representative who serves on the center’s advisory council. The council also has three farmer representatives and meets annually to provide feedback on research they would like to see funded.

About the Iowa Soybean Research Center