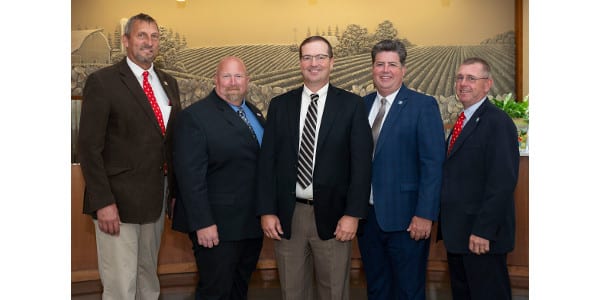 ANKENY, Iowa — The Iowa Soybean Association board of directors elected executive committee officers this week to serve the association in one-year terms.

Jorgenson welcomed the state soybean leaders to their posts as he begins his presidency.

“This team of leaders is experienced, dedicated and passionate about the soybean industry and driven to deliver for the association,” he said. “A new year offers new opportunities to serve in the best interest of soybean farmers throughout the state.”

ISA directors also elected Jorgenson to serve as a director on the board of the American Soybean Association (ASA). Continuing to represent Iowa soybean farmers on the ASA board are Walton, Morey Hill of Madrid, Steph Essick of Dickens, Wayne Fredericks of Osage and Brian Kemp of Sibley.

“It’s our privilege to be stewards of farmers’ checkoff dollars,” Jorgenson said. “Leadership is never more important than in tumultuous times and I look forward to leading with this team of farmers.”

New records in the dairy industry; what is ahead?
September 21, 2020