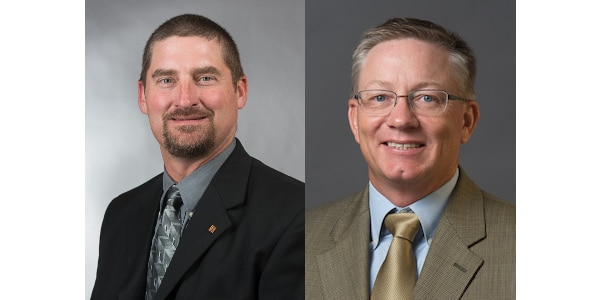 Tom Oswald (right) of Cleghorn and Tim Bardole (left) of Rippey will join the board of 73 farmer directors from across the country; four representing Iowa. (Courtesy of Iowa Soybean Association)

ANKENY, Iowa — The U.S. Department of Agriculture (USDA) has appointed two Iowa soybean farmers to serve as directors on the United Soybean Board (USB).

Tom Oswald of Cleghorn and Tim Bardole of Rippey will join the board of 73 farmer directors from across the country; four representing Iowa. They will accept their appointments at the confirmation hearing in December.

“USB directors play an important role in managing checkoff dollars,” said Bardole, who completed his Iowa Soybean Association (ISA) presidency in September. “Serving as ISA President helped me recognize how important representation is, especially when it comes to being a steward of these funds.”

Bardole and Oswald will play a critical role in overseeing the proper implementation of soybean checkoff funding to support research, market development and promotional efforts maximizing profit opportunities for all U.S. soybean farmers.

“It’s an honor to continue representing soybean farmers through this reappointment,” said Oswald, who has served as a USB director since 2014. “It’s important farmers know who represents them and I encourage soybean farmers to reach out to any of us serving to see how we’re putting checkoff dollars to use.”

Oswald also served as ISA President in 2014. His USB confirmation in December will commence his last term as a national director.

“I’ve seen firsthand the value the soybean checkoff brings to the industry and to every farmer,” he added. “It is a privilege to play a role in the management of these dollars and see up close the many ways the checkoff lends support to new soybean uses that improve our market demand.”