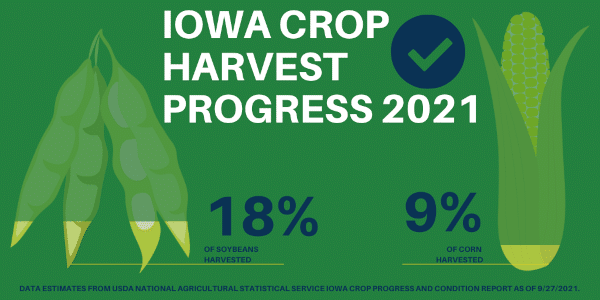 "Weather conditions have allowed harvest to get underway in many areas of the state," said Secretary Naig. "Forecasts through the end of the month, along with initial October outlooks, show the possibility of unseasonably warm temperatures continuing." (Courtesy of Iowa Department of Agriculture and Land Stewardship)

“Weather conditions have allowed harvest to get underway in many areas of the state,” said Secretary Naig. “Forecasts through the end of the month, along with initial October outlooks, show the possibility of unseasonably warm temperatures continuing.”

Spotty precipitation did not slow activities down significantly as Iowa’s farmers had 6.1 days suitable for fieldwork during the week ending September 26, 2021, according to the USDA, National Agricultural Statistics Service. Field activities included spraying for army worms in forages as well as harvesting hay, soybeans and corn.

Pasture condition rated 30 precent good to excellent. Low water levels in some creeks and ponds have been an issue for livestock on pasture.

The last full week of September brought a mix of unseasonably cool and warm days to Iowa. Overall average temperatures were warmer east and near-normal to cooler west. The statewide average temperature was 61.1 degrees, 1.9 degrees above normal. All of Iowa’s weather stations reported measurable precipitation, though rainfall deficits persisted with up to 0.50 inch reported at many central and southwestern gauges; above-average totals were observed in several pockets across Iowa.

Strong southerly winds and sunny skies lifted daytime highs in the upper 80s and low 90s on Sunday (19th) afternoon with a statewide average high at 88 degrees, 14 degrees above normal. Clouds increased through the nighttime hours as a strong cold front entered northwestern Iowa during the early morning hours of Monday (20th). An initial line of showers formed and proceeded into central Iowa before dissipating as it moved into a drier atmosphere. With higher humidity and afternoon highs in the mid 80s in front of the boundary, a secondary line of thunderstorms fired in west-central Iowa and pushed across the state. Some of the thunderstorms became severe with several occurrences of straight-line winds producing tree damage. As the line filled in, widespread rain was reported at a majority of Iowa’s stations with general totals above 0.30 inch. Almost 60 stations measured more than an inch with several stations in Des Moines County reporting over 2.00 inches; a gauge in Burlington observed 3.00 inches. Clouds quickly cleared through the late evening hours and cooler air filtered in behind the front along with northerly winds. Overnight lows on Tuesday (21st) morning ranged from the low 40s northwest to upper 50s southeast. Pleasant conditions persisted through the day with highs in the upper 60s and low 70s under mostly sunny skies. Chilly temperatures were observed overnight with mid to upper 30s in western Iowa where starry skies were present before sunrise; slightly warmer conditions blanketed eastern Iowa with light northerly winds. Wednesday (22nd) continued the comfortable conditions with variable winds and highs hovering in the upper 60s and low 70s. Temperatures cooled into the upper 30s and 40s over much of the state with clear skies and a light, variable wind.

Thursday (23rd) was a sunny and breezy day with winds shifting to a southerly direction as a high pressure center pushed into Iowa. Afternoon conditions were ideal with highs in the low to mid 70s and low relative humidity. Clear skies continued into Friday (24th) morning with upper 40s and low 50s blanketing the state. Clouds began building up in northwestern Iowa during the late morning hours as a cold front approached Iowa. Light rain showers formed along the front as it raced west to east, clearing eastern Iowa late in the evening. While the rain was widespread, totals were at or below 0.30 inch with a majority of stations reporting accumulations below 0.10 inch; Fort Dodge (Webster County) observed 0.24 inch while Lamoni (Decatur County) measured 0.30 inch. With colder air pushing in behind the front, freezing temperatures were reported for the first time this fall as lows dipped into the 30s west to mid 40s east; the statewide average low was 40 degrees, eight degrees below average. Brilliant sunshine and westerly winds were observed on Saturday (25th) as Iowa experienced near-seasonal temperatures. Winds shifted to a southerly direction overnight into Sunday (26th) with temperatures remaining in the 50s.

Weekly rain totals ranged from 0.01 inch at Bedford (Taylor County) to 3.04 inches in Burlington. The statewide weekly average precipitation was 0.53 inch while the normal is 0.82 inch. Muscatine (Muscatine County) observed the week’s high temperature of 94 degrees on the 19th, 18 degrees above normal. Atlantic (Cass County), Audubon (Audubon County) and Guthrie Center (Guthrie County) reported the week’s low temperature of 32 degrees on the 25th, on average 14 degrees below normal. 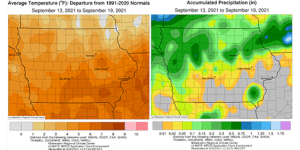 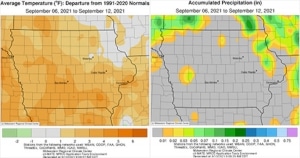 DES MOINES, Iowa — Iowa Secretary of Agriculture Mike Naig commented Monday on the Iowa Crop Progress and Condition report released by the USDA National Agricultural Statistics Service. The report is released weekly from April through November. “Unseasonably warm and dry conditions allowed farmers to ramp up fieldwork and some parts of the state may […] 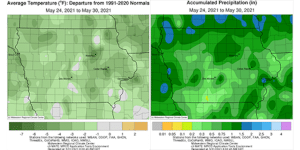