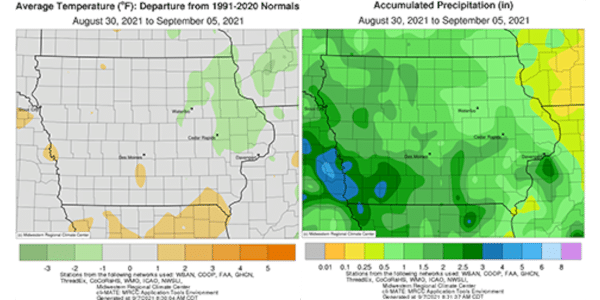 The statewide weekly average precipitation was 1.42 inches while the normal is 0.90 inch.

“Many parts of the state have experienced some relief from the ongoing drought conditions thanks to seasonal temperatures and more rainfall,” said Secretary Naig. “As we approach harvest, short-term outlooks show warmer and drier conditions.”

Precipitation across most of the State, in addition to that received the previous week, limited Iowa’s farmers to 4.3 days suitable for fieldwork during the week ending September 5, 2021, according to the USDA, National Agricultural Statistics Service. Field activities included harvesting hay, oats and corn silage.

The third cutting of alfalfa hay reached 88% complete, four days ahead of the 5-year average. Pasture condition was rated 34% good to excellent. No livestock issues were reported for the week.

Seasonal temperatures returned to Iowa over the reporting period with slightly cooler conditions in eastern Iowa. The statewide average temperature was 68.0 degrees, 0.6 degree below normal. Widespread rain fell statewide with the wettest conditions in western Iowa; multiple rounds of showers and thunderstorms helped ease some drought conditions. This was the second week in which Iowa’s average precipitation total was above normal.

Clouds gradually cleared through the afternoon hours on Sunday (29th) as pleasant conditions built in behind a passing cold front. Daytime highs stayed in the upper 70s and low 80s with a light northerly wind. Winds became variable overnight with morning lows on Monday (30th) ranging from the upper 50s north to mid 60s south. Clear skies stuck around across northern Iowa with partly cloudy skies over the state’s southern half. Afternoon temperatures reached into the mid 80s south to upper 70s north. Scattered thunderstorms began forming in northwestern Iowa during the evening hours before consolidating into an organized squall line prior to midnight. Some embedded storms turned severe as the line pushed into west-central Iowa. Golf ball-sized hail shredded crops in Ida County and there were multiple reports of tree and structural damage around the Des Moines metro area. The leading edge of the squall line raced over the Iowa-Missouri border by 3:00 am on Tuesday (31st) as moderate rainfall filled in behind the line. Rain totals measured at 7:00 am were highest from central to southwestern Iowa where over 100 stations observed an inch or more. Multiple stations also reported above two inches, ranging from 2.04 inches near Anita (Cass County) to 3.45 inches in Mondamin (Harrison County); the statewide average rainfall was 0.68 inch. The remaining showers moved out of central Iowa by mid-day with additional isolated cells developing in eastern Iowa during late afternoon. Temperatures remained in the 70s as skies gradually cleared west to east into the morning hours on Wednesday (1st). Rain totals from the backside of the disturbance were generally under a few tenths of an inch, though higher totals were observed in southeastern Iowa with Le Claire Lock and Dam (Scott County) measuring an inch while Columbus Junction (Louisa County) reported 1.30 inches. Uncommon easterly winds and mostly sunny skies remained through the day as mid to upper 70s blanketed Iowa.

Overnight lows into Thursday (2nd) varied from the upper 50s southeast to mid 60s northwest. A broad area of low pressure began propagating through northwestern Iowa late morning, bringing showers and few thunderstorms over the area. A secondary wave of heavier showers and storms formed along the low’s attendant cold front late into the evening and pushed over most of the state’s western two-thirds by sunrise on Friday (3rd). Much of northern Iowa experienced rain totals of above 0.50 inch with several stations observing more than 1.50 inches; a station near Lake Park (Dickinson County) measured 2.10 inches while the statewide average was 0.49 inch. Overcast skies persisted through the day and into Saturday (4th) morning holding lows in the mid to upper 60s for most of Iowa. Mist and drizzle were present in eastern Iowa into the early afternoon as pockets of sunshine broke through the clouds. Skies continued to clear with temperatures topping out in the mid to upper 70s. Spotty fog and some upper 40 degree readings were reported in northern Iowa on into early Sunday (5th).

Weekly precipitation totals ranged from 0.33 inch at Keokuk Lock and Dam (Lee County) to 3.89 inches near New Market (Taylor County). The statewide weekly average precipitation was 1.42 inches while the normal is 0.90 inch. Several southern stations observed the week’s high temperature of 89 degrees on the 30th, on average seven degrees above normal. Stanley (Buchanan County) reported the week’s low temperature of 46 degrees on the 5th, six degrees below normal.