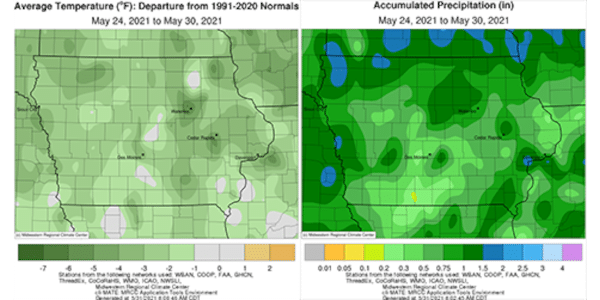 Beneficial rains helped stimulate crop growth and cool, cloudy conditions allowed needed moisture to stay in the soil during the week ending May 30, 2021 according to the USDA, National Agricultural Statistics Service.

“Cooler weather and overcast skies have slowed some corn and soybean growth,” said Secretary Naig. “Near-freezing temperatures over the weekend may have affected some crops across portions of northern and eastern Iowa. However, we expect warmer conditions this week, which should accelerate crop development.”

Beneficial rains helped stimulate crop growth and cool, cloudy conditions allowed needed moisture to stay in the soil during the week ending May 30, 2021 according to the USDA, National Agricultural Statistics Service. Below normal overnight temperatures, primarily in low-lying areas, resulted in scattered reports of frost. Statewide there were 3.4 days suitable for fieldwork during the week. In addition to planting, field activities included spraying, side dressing and chopping cover crops.

Seventeen percent of the State’s first cutting of alfalfa hay has been completed, 2 days behind the 5-year average. Iowa’s hay condition was rated 62% good to excellent. Pasture condition improved to 54% good to excellent. There was little stress on livestock although some feedlots remain muddy.

May’s final full week brought several days of cloud cover to Iowa with slightly cooler than normal temperatures blanketing the state; the statewide average temperature was 60.8 degrees, 2.9 degrees below normal. Measurable rain also fell over Iowa, though totals were still below average for this time of year with 0.50 inch to 1.00 inch deficits observed in portions of southern Iowa.

Spotty showers popped up across eastern Iowa through the afternoon and evening hours on Sunday (23rd) as daytime temperatures pushed into the low 80s south to mid 80s northwest; conditions remained in the upper 70s over the northeast where clouds were present. Rainfall was generally under a few tenths of an inch, though two stations near Coralville (Johnson County) measured 1.15 inches and 1.28 inches, respectively, from a heavier cell. Clouds cleared the state around midnight but returned as a disturbance moved into western Iowa. Spotty showers formed in eastern Iowa over the morning hours of Monday (24th) and persisted for several hours. Daytime highs remained in the upper 70s and low 80s with a southerly wind and partly sunny skies. Additional showers moved into northwestern Iowa along the border with South Dakota and Minnesota; five rain gauges in Lyon County collected from 0.61 inch to 1.15 inches from the heavier showers. With a warm air mass situated over the Midwest, overnight lows into Tuesday (25th) were very warm, remaining in the upper 60s, with a 71-degree reading at Clinton (Clinton County). Temperatures were up to 15 degrees above average with a statewide average low of 66 degrees, 13 degrees warmer than normal. In advance of a strong cold front, afternoon temperatures reached into the low to mid 80s and sunny skies, leading to atmospheric instability. As the front advanced into central Iowa, strong and some severe thunderstorms fired in the evening, quickly losing strength as the sun set; 1.25-inch hail was reported in Des Moines (Polk County).

Winds shifted to a northerly direction behind the front as clouds cleared on Wednesday (26th). Pleasant conditions persisted with 70s observed over much of Iowa. Clouds increased west to east as a low pressure system pushed into southwestern Iowa early on Thursday (27th) morning streaming additional showers across the region. The disturbance cleared Iowa’s northeastern corner later in the afternoon as cooler air rushed in behind. Under cloudy skies and northerly winds, overnight lows retreated into the low 40s. Event rainfall totals observed at 7:00 am on Friday (28th) showed nearly 50 stations picking up an inch or more with a gauge near Fort Madison (Lee County) measuring 2.40 inches; the statewide average rainfall was 0.57 inch. Daytime highs did not deviate much from morning, only breaking into the upper 40s and low 50s, well below normal for the end of May. Overnight temperatures into Saturday (29th) were at or below freezing at several northern and eastern Iowa stations with the remaining stations in the mid 30s and low 40s; the statewide average low of 37 degrees, 13 degrees below normal. Afternoon conditions were generally sunny with low to mid 60s and variable winds. Clouds again increased into Sunday (30th) as rain showers moved into northwestern Iowa with Spencer Municipal Airport (Clay County) reporting 0.49 inch at 7:00 am.

Weekly precipitation totals ranged from 0.14 inch at Beaconsfield (Rinngold County) to 3.05 inches near Fort Madison. The statewide weekly average precipitation was 0.89 inch while the normal is 1.08 inches. Several stations observed the week’s high temperature of 87 degrees between the 24th and 26th, on average 13 degrees above normal. Elkader (Clayton County) reported the week’s low temperature of 29 degrees on the 29th, 22 degrees below normal.