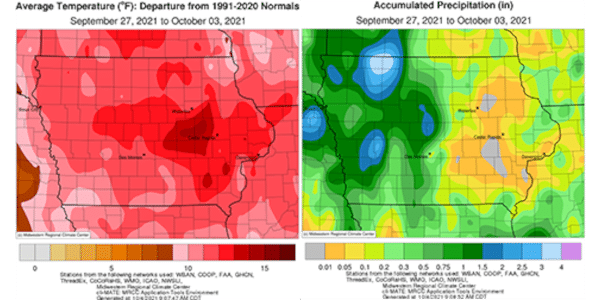 “This past week, western Iowa experienced above-average rainfall, which slowed fieldwork. However, the entire state saw a return to summer-like weather as temperatures felt more like late August as opposed to early fall,” said Secretary Naig. “Overall, final October outlooks show the possibility of warmer and wetter conditions and minimal chances of an early frost.”

“This past week, western Iowa experienced above-average rainfall, which slowed fieldwork. However, the entire state saw a return to summer-like weather as temperatures felt more like late August as opposed to early fall,” said Secretary Naig. “Overall, final October outlooks show the possibility of warmer and wetter conditions and minimal chances of an early frost.”

Harvest made good progress even with variable precipitation late in the week, allowing Iowa’s farmers 5.5 days suitable for fieldwork during the week ending October 3, 2021, according to the USDA, National Agricultural Statistics Service. Field activities included harvesting hay, soybeans and corn.

Soybeans dropping leaves or beyond reached 92 percent, eight days ahead of normal. Producers harvested over 20 percent of Iowa’s soybean crop during the week ending October 3, with the total harvested reaching 40 percent, ten days ahead of the five-year average. Farmers in central and east central Iowa have now harvested half of their soybean crop. Soybean condition was rated 64 percent good to excellent.

Pasture condition rated 27 percent good to excellent. Spotty precipitation helped keep some pastures green for cattle to continue grazing, but water for livestock continues to be an issue.

Warm conditions and gusty southwesterly winds continued through Sunday (26th) afternoon under sunny skies as temperatures pushed into the mid to upper 80s. As winds died down overnight, lows ranged from the low 50s north to mid 60s south; the statewide average low was 53 degrees, six degrees above normal. Monday (27th) was another hot day with daytime highs in the mid 80s and low 90s at a majority of Iowa’s reporting stations as winds shifted behind a weak frontal boundary. Overnight lows reported at 7:00 am on Tuesday (28th) were slightly cooler than the previous morning with winds out of the east under clear skies. Unseasonable warmth persisted throughout the day as high temperatures varied from the low 80s east to low 90s west as winds gradually shifted to a southwesterly direction. A stationary front draped north to south in western Iowa was a focusing mechanism for isolated showers in the southwest corner early in the afternoon on Wednesday (29th). Temperatures remained in the mid 80s as cloud cover increased in western Iowa. The first wave of showers and thunderstorms formed over the state’s western half overnight into Thursday (30th) and persisted through the morning hours before dissipating in northwestern Iowa just after noon. A secondary wave formed later in the evening over the same region as overnight temperatures were held in the 60s under overcast skies. Rain totals for the event were highest across western Iowa while much of eastern Iowa missed out. Nearly 100 stations reported an inch or more with 30 measuring above two inches; Atlantic (Cass County) reported 2.02 inches and Estherville (Emmet County) observed 3.21 inches with general totals across the region around 0.22 inch.

As the low pressure center pushed east Friday (1st) morning, light showers formed behind the system into the afternoon hours. Sunshine peeked between gaps in the clouds as light rain and drizzle fell across much of Iowa through the evening hours. Stations reported totals below a few tenths of an inch though a handful of north-central and southeastern stations observing over a 0.50 inch; Donnellson (Lee County) measured 0.52 inch with Estherville picking up another 0.94 inch. Afternoon temperatures varied from the low 70s west to low 80s east, where more sunshine was present. Cloud cover and fog were present overnight into Saturday (2nd) with dreary and damp conditions hanging on throughout the day. Winds shifted to a westerly direction as isolated showers formed in southeastern Iowa. A majority of stations reporting rain had under a tenth of an inch, though De Witt (Clinton County) measured 0.49 inch. Clouds began to clear in western Iowa at sunrise with lows in the 50s northwest to mid 60s southeast on Sunday (3rd) morning.

Weekly rain totals ranged from no accumulation at several eastern Iowa stations to 4.15 inches at Estherville. The statewide weekly average precipitation was 0.55 inch while the normal is 0.70 inch. Red Oak (Montgomery County) observed the week’s high temperature of 95 degrees on the 28th, 21 degrees above normal. Eldora (Hardin County) reported the week’s low temperature of 37 degrees on the 27th, seven degrees below normal.